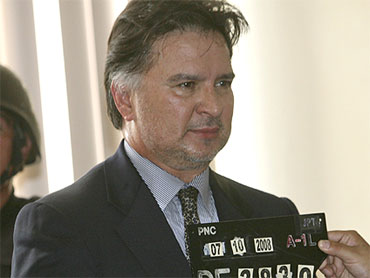 Dozens of agents raided a ranch in the province of Izabal to execute the arrest, Attorney General Amilcar Velasquez said.

An indictment unsealed Monday in federal court in New York alleges that in a four-year scheme starting in 2000, Portillo embezzled $1.5 million in donations from Taiwan intended to buy school library books.

It accused Portillo of endorsing checks drawn from a New York bank and depositing them in a Miami account; the money then was transferred to a Paris account in the name of his ex-wife and daughter.

In 2001, prosecutors say, Portillo conspired with two members of the Guatemalan military - an unnamed colonel in charge of his security detail and an intelligence officer - to embezzle millions of dollars from the government. Some of the money was allegedly used to buy expensive cars and watches.

The disgraced politician already was facing embezzlement charges in his own country.

Portillo, 58, served as president from 2000 to 2004 before fleeing to Mexico. He got a work visa and began working as a financial adviser for a construction materials company there, but was extradited to Guatemala in 2008.

The U.S. charges carry a possible prison sentence of 20 years.