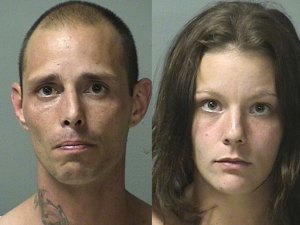 (CBS) MANCHESTER, N.H. - Jonathan Bijoel and Cassandra Gagnon were arrested by Manchester police who say they found them with a loaded gun in a baby carriage, with a baby in it, reported CBS Boston.

After responding to a reported assault on Monday, police say they spoke with the alleged victim who put them on the trail of Bijoel, 28.

He and Gagnon, 23, were walking with his one-year-old daughter in a carriage. When police approached them, "Gagnon took control of the carriage and attempted to walk away but the trio was ultimately detained without incident," Manchester police Lt. Maureen Tessier told CBS Boston in a statement.

Police said they then found a loaded 9mm handgun in the storage area underneath the seat of the carriage. They determined the gun was stolen.

Bijoel and Gagnon were both arrested and held for violating bail.

Bijoel was also charged with robbery, theft of a firearm and felon in possession of a firearm, tied to a felony conviction in Arizona in 2001, according to CBS Boston.

Gagnon was charged with falsifying evidence.