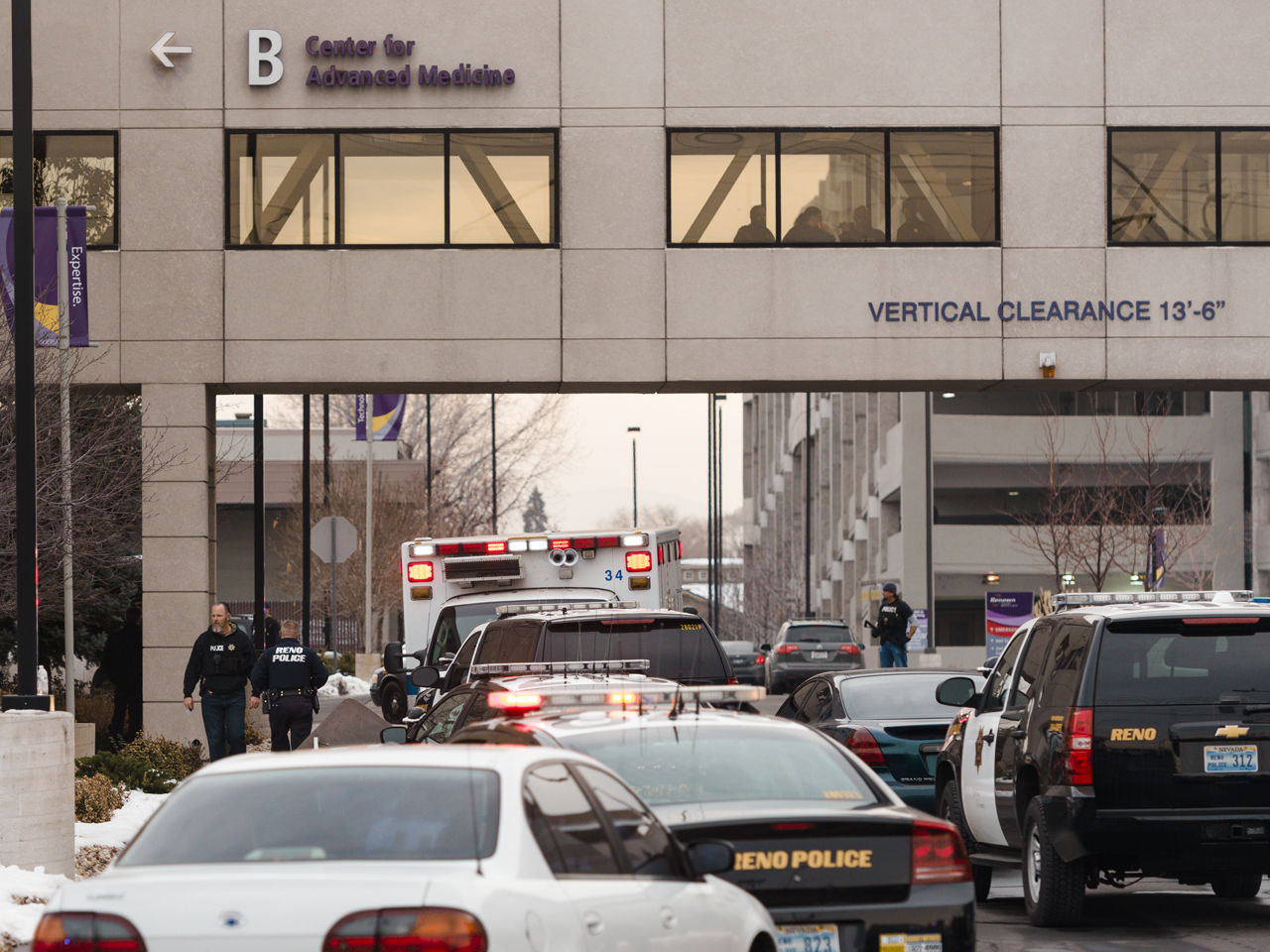 RENO, Nev. -- Some fled in panic as gunshots echoed through a sprawling Reno hospital complex while others locked themselves in medical offices as dozens of police cars and SWAT teams sealed off a three-block area and heavily armed officers began a nervous room-to-room search.

A suicidal gunman killed one person and critically wounded two others - including a doctor - who were rushed across the campus to emergency surgery after the intruder turned the gun on himself Tuesday.

The male gunman and his victims were found on the third floor in the same general area of the medical office building, all with gunshot wounds. The two survivors were in critical condition.

It doesn't appear to have been a random shooting, but investigators have more questions than answers about what led to the mid-afternoon attack on the grounds of the Renown Regional Medical Center, Reno Deputy Police Chief Tom Robinson said.

"I wouldn't say they were targeted, but I don't think it was just a random (in which the shooter decided) 'I'm going to go up there and start shooting,'" Robinson told reporters outside the medical building. He appealed to the public to contact detectives if they saw anything suspicious outside the hospital before the shooting.

"We want to get the information so we can kind of put the pieces of this puzzle together and kind of figure out what happened," he said Tuesday night. He said police hoped to release additional information at a briefing Wednesday at 10 a.m. local time.

One area resident said he was at the center for an appointment with his 3-year-old child when they encountered the man entering the building with a gun, possibly a shotgun.

"He wasn't agitated or anything. He was just normal," Vita Ozoude told a Reno television station. But he said the gunman did say something to the effect of, "You better get out of here."

Police didn't release any names of the wounded of dead and had yet to remove the bodies as of Tuesday night.

"They are in the middle of a crime scene," Robinson said. "We're in the middle of an investigation and we don't want to compromise that by rushing up to identify them. ... As far as the suspect goes, we still don't have a solid identity yet but we are working several leads on who he is."

Investigators said they were confident no one else was involved, but Robinson said he didn't know how many shots were fired or what type of weapon was used.

"I don't even know if there were multiple weapons at this time," he said.

Department of Public Safety spokeswoman Gail Powell said the wounded doctor is a woman but she had no other information about the shooting at the Center for Advanced Medicine, a modern structure connected by a second-floor walkway to the main hospital and a parking structure.

Robinson said there were about 100 people in the building when the shooting was reported at 2:05 p.m. Officers entered three to five minutes later and did "a systematic search, floor to floor, room to room," Robinson said.

Renown Regional Medical Center was put on lockdown as law enforcement rushed to the scene and victims were treated by doctors on the hospital campus.

State Sen. Debbie Smith said she was at Renown for an appointment and was trying to leave a nearby building when the shooting occurred.

"I encountered some SWAT team guys, they said nobody was leaving," she said.

The medical center posted a notice on its website less than two hours after the shooting saying operations had returned to normal at the main hospital. About two dozen witnesses were taken to police headquarters for interviews.

Gov. Brian Sandoval said on Twitter his thoughts and prayers were with those affected by the tragedy.

The shooting came nearly two months after a 12-year-old boy opened fire at an area middle school, killing a math teacher before taking his own life. Two other students were treated for their injuries at Renown Regional Medical Center, the largest hospital in northern Nevada.

The medical center has treated victims of other recent tragedies in northern Nevada, including a crash at a Reno air race in 2011 that killed 11 people and a rampage at a Carson City restaurant the same year that killed three uniformed Nevada National Guard members.