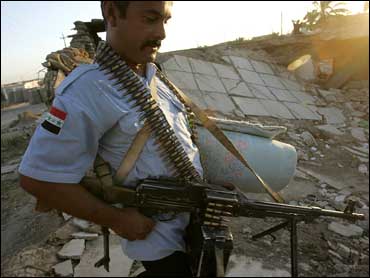 Militants packed into four cars screeched up to the checkpoint south of Mosul at around 1:30 a.m., attacking it from both sides, said police Brig. Abdel-Karim al-Jubouri. Clashes lasted about 15 minutes, after which all the gunmen escaped, al-Jubouri said.

Six policemen were killed and the other four at the checkpoint were wounded - all men from the local area, he said. Al-Jubouri said it is believed that the assailants - suspected members of the al Qaeda front group the Islamic State of Iraq - sustained some casualties but nobody was left behind.

The attack occurred in the Gayara area south of Mosul, a mostly Sunni Muslim city that includes many ethnic Kurds, located about 225 miles northwest of Baghdad.

The area has seen an increase in violence since U.S. and Iraqi troops launched offensives earlier this year to oust Sunni militants from the Iraqi capital and its surrounding belts. Some al Qaeda-linked insurgents are believed to have fled north, digging into positions in the Sunni-dominated Mosul area.

At least two prison breaks earlier this year also emptied hundreds of suspected insurgents into the streets there.

The Sunni insurgency also has been strong in the volatile Diyala province east of Baghdad, where four civilians were killed and four others injured on Wednesday.