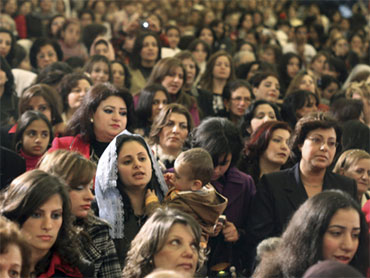 Gunmen killed at least seven people in a drive-by shooting outside a church in southern Egypt as worshippers left a midnight Mass for Coptic Christmas on Thursday, the church bishop, security and hospital officials said.

The attack took place in the early morning hours in the town of Nag Hamadi in Qena province, about 40 miles from the famous ancient ruins of Luxor.

The security official said two gunmen drove by a group as they were walking out of the Virgin Mary church and sprayed gunfire randomly into the crowd. The security and hospital officials spoke on condition of anonymity because they were not authorized to talk to the media.

Qena is one of Egypt's poorest and most conservative areas.

Muslim-Christian clashes, largely confined to the south of the country in recent years, have seeped into the capital. As Islamic conservatism gains ground, Christians have increasingly complained about discrimination by the Muslim majority.

In summer 2008 in southern Egypt, a Muslim man was killed in clashes over the expansion of a Coptic Orthodox monastery, and Muslims torched Christian villagers' homes because a priest was seen holding Mass inside a house, according to the Egyptian Initiative for Personal Rights, a rights group.