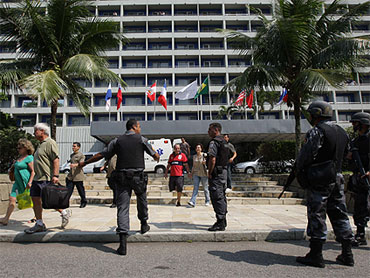 Gunmen invaded a luxury hotel popular with foreign tourists and took 30 people hostage Saturday but within hours freed the captives and surrendered to police.

The 10 who invaded the Intercontinental Hotel were part of a large group of heavily armed, suspected drug-gang members who had become embroiled in a shootout with police outside a large slum near the upscale Sao Conrado neighborhood, a police spokeswoman said. The other suspects fled.

"The gunmen were holding the hostages in the kitchen of the hotel, but we negotiated with them," said the spokeswoman, who could not be identified because she was not authorized to discuss the matter. "All of the hostages are freed and 10 suspects are in custody."

Police were still searching the hotel to make sure no other gunmen remained inside, she said.

One bystander was killed during the shootout with police, the spokeswoman said.

Television images showed an elite unit of Brazil's military police entering the hotel and evacuating approximately 400 guests, many of whom were staying there for a dentists' convention.

Spent casings from high-caliber weapons littered the pavement in front of the hotel and residents of the neighborhood said they were awakened by the shooting.

Security in Rio de Janeiro is of great concern as the city prepares to host the final of the 2014 football World Cup and the 2016 Olympic Games. Officials have vowed to fight violence, and in the past year started an aggressive program of invading slums where heavily armed drug gangs hold sway, driving them out and creating police posts in those poor communities.

The program has managed to clear drug gangs from about 10 slums located in Rio's rich southern zone.

The Intercontinental is a favorite among foreign tourists, but the nationalities of those taken hostage was not immediately known.