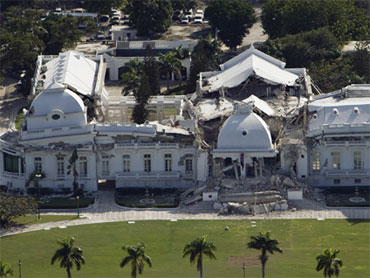 Scientists who detected worrisome signs of growing stresses in the fault that unleashed this week's devastating earthquake in Haiti said they warned officials there two years ago that their country was ripe for a major earthquake.

Their sobering findings, presented during a geological conference in March 2008 and at meetings two months later, showed that the fault was capable of causing a 7.2-magnitude earthquake - slightly stronger than Tuesday's 7.0 quake that rocked the impoverished country.

Though Haitian officials listened intently to the research, the nearly two years between the presentation and the devastating quake was not enough time for Haiti to have done much to have prevented the massive destruction.

"It's too short of a timeframe to really do something, particularly for a country like Haiti, but even in a developed country it's very difficult to start very big operations in two years," Eric Calais, a professor of geophysics at Purdue University, said Thursday.

Their conclusions also lacked a specific timeframe that could have prodded quick action to shore up the hospitals, schools and other buildings that collapsed and crumbled, said Paul Mann, a senior research scientist at the University of Texas' Institute for Geophysics.

At the time of earthquake, which the International Red Cross estimated killed 45,000 to 50,000 people, Haiti was still trying to recover from a string catastrophes. In 2008 alone, it was hit four times by tropical storms and hurricanes. The country also suffers from a string of social ills including poverty, unstable governments and poor building standards that make buildings vulnerable in earthquakes.

"Haiti's government has so many other problems that when you give sort of an unspecific prediction about an earthquake threat they just don't have the resources to deal with that sort of thing," Mann said.

In March 2008, Calais and Mann were among a group of scientists who presented findings on the major quake risk along the Enriquillo fault during the conference in the Dominican Republic, which shares the island of Hispaniola with Haiti. Their conclusions were based both on geologic work Mann conducted along the same fault and recent findings by Calais.

Calais had detected rising stresses along the fault using global positioning system measurements that showed that the Earth's crust in the area where the fault traverses southern Haiti was slowly deforming as pressure grew within the fault.

That pressure, paired with Mann's work and the fact that the last major quake in the area was in 1770, led to the prediction that the fault could produce a 7.2-magnitude temblor.

Calais said he also presented the findings to officials in Haiti during a series of meetings in May 2008 that included the country's prime minister and other high-ranking officials. He said he stressed to the officials that if they did nothing else they should at least begin reinforcing hospitals, schools and key government buildings to weather a strong quake.

"We were taken very seriously but unfortunately it didn't translate into action," he said. "The reality is that it was too short of a timeframe to really do something, particularly for a country like Haiti struggling with so many problems."

Calais said Haiti has no seismic stations for monitoring quake activity, while adjoining Dominican Republic has a small seismic network.

Although the specific risks of the fault zone near Haiti's capital, Port-au-Prince, may not have been known until recent years, the region has a long history of major earthquakes, said Carol Prentice, a U.S. Geological Survey research geologist based in Menlo Park, Calif.

Those include earthquakes that destroyed Jamaica's capital, Kingston, in 1692 and 1907, that also occurred along the Enriquillo fault, which extends hundreds of miles through the Dominican Republic, Haiti and Jamaica.

She said Calais' GPS studies were the first along the fault to quantify the potential quake risk in the heavily populated Port-au-Prince area.

Prentice said she, Calais and Mann had sought U.S. government funding over the years for detailed excavations in southern Haiti to document evidence of past quakes in soil layers along the fault but that work has not yet been funded.

"It's entirely possible that we'll see additional quakes along this fault in the years to come. But we really don't know the risk if those studies aren't done," she said.


For more info:
"Interseismic Plate Coupling and Strain Partitioning in the Northeastern Caribbean" (3.08)