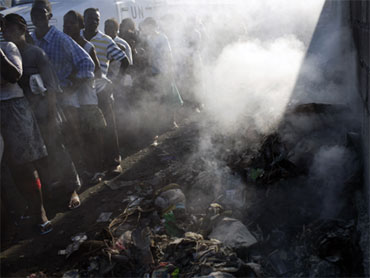 The confirmed death toll from Haiti's devastating earthquake has topped 150,000 in the Port-au-Prince metropolitan area alone, the communications minister said Sunday, with many more thousands dead around the country or still buried under the rubble.

Communications minister Marie-Laurence Jocelyn Lassegue told The Associated Press that the figure is based on a body count in the capital and outlying areas by CNE, a state company that has been collecting corpses and burying them in a mass grave north of Port-au-Prince. It does not include other affected cities such as Jacmel, where thousands are believed dead, nor does it account for bodies burned by relatives.

The United Nations said Saturday the government had confirmed 111,481 bodies; all told, authorities have estimated 200,000 dead from the magnitude-7.0 quake, according to Haitian government figures cited by the European Commission.

Experts say chances are slim that more survivors will be found in that debris, although rescuers pulled a man buried for 11 days in the wreckage on Saturday.

Crews dug a tunnel through the rubble of a fruit and vegetable shop to reach Wismond Exantus, who is in his 20s. He was placed on a stretcher and given intravenous fluids as onlookers cheered, and later told the AP he survived by diving under a desk during the quake and later consuming some cola, beer and cookies in the cramped space.

"I was hungry, but every night I thought about the revelation that I would survive," Exantus said from his hospital bed.

Haiti's government has declared an end to searches for living people trapped under debris, and officials are shifting their focus to caring for the thousands of survivors living in squalid, makeshift camps.

U.N. relief workers said the shift is critical: While deliveries of food, medicine and water have ticked up after initial logjams, the need continues to be overwhelming and doctors fear outbreaks of disease in the camps.

In the notorious slum of Cite Soleil, the site of some looting and violence since the quake, U.S. and Brazilian soldiers handed out food and water Sunday morning to thousands of men, women and children who lined up at a health center.

Lunie Marcelin, 57, said her entire family - including six grown children who live with her - survived the quake, but they had no money to buy food.

The handouts "will help us, but it is not enough," she said. "We need more."

In the United States, organizers of the all-star "Hope for Haiti Now" telethon said Saturday that the event raised $57 million - and counting. The two-hour telethon aired Friday night and was also streamed live online. Stars such as Brad Pitt, Beyonce, Madonna, Bruce Springsteen and more used their presence to encourage donations for Haiti.

As many as 200,000 people have fled Port-au-Prince, a city of 2 million, according to the U.S. Agency for International Development. About 609,000 people are homeless in the capital's metro area, and the United Nations estimates that up to 1 million could leave Haiti's destroyed cities for rural areas already struggling with extreme poverty.

The U.S. Geological Survey said Sunday it has recorded 52 aftershocks of magnitude 4.5 or greater since the Jan. 12 quake.
By Associated Press Writers Michelle Faul and Paul Haven; AP Writers