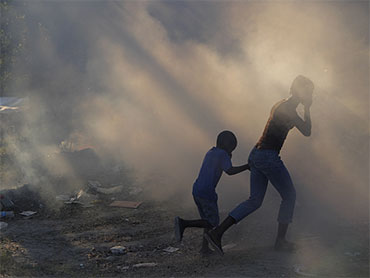 More than a week after an earthquake leveled swaths of the Haitian capital, the recriminations are circulating faster than clean water. From CNN's Anderson Cooper to blogs and social networks, questions echo: Why is help taking so long? Why can't the relief process be streamlined? Can't this thing go any faster?

"What on Earth has gone wrong?" the Arab News, an English-language newspaper in the Middle East, wondered in a sharp editorial this week.

But take a step back. While the difficulties of negotiating the decimated Haitian infrastructure are clear and the logistical and administrative problems formidable, could a perception gap be at play, too? Are the expectations of the virtual world colliding with the realities of the physical one?

In the space of a single generation, ours has become a world of live video chats, one-click online ordering, overnight delivery, on-demand movies and instantaneous electronic fund transfers - including sending aid to Haiti via your cell phone. It becomes only natural, in such a society, to bristle at any delays.

Trouble is, the physical world can't move as fast as the virtual one and, barring the invention of a "Star Trek"-style transporter, probably never will. Unlike medicine and food and water, information no longer has to travel via plane and boat and road and foot. News can arrive immediately. But doing something about it? That's another thing entirely.

"The immediacy and the vividness of the images and the news we receive from Haiti accentuate our desire to do something quickly. And that's certainly not a bad thing," says James Gleick, author of "Faster: The Acceleration of Just About Everything."

But, he says, "The only thing that travels at light speed is information. And there are all kinds of sources of tension right now between our desire to have things instantaneously and physical reality."

The initial images of the Haiti quake last week emerged via Twitter within minutes. But it took hours for the first emergency response from abroad to arrive. And today in the Haitian capital, progress can be glacial: Fuel queues are three hours long, many roads are impassable, and trip times around the capital have doubled.

"The aid is never fast enough for the armchair aid workers sipping their lattes," says Steve Matthews, a spokesman in Haiti for World Vision, a relief group. He says that, despite slowness, aid is flowing, "things are happening" and relief workers understand the race against time.

He's onto something. The appetite in many industrialized cultures, the United States in particular, is attuned to the slickly packaged story, Hollywood style. That means that conflict is followed by resolution, and then we move on to the next thing.

Add the round-the-clock news cycle and the immediacy of the Internet, where communication now can mean a service that conveys rapid-fire information in 140-character bursts, and suddenly you have a generation of people who feel uncomfortable when something doesn't happen RIGHT NOW. There's a reason, after all, that the BlackBerry was nicknamed the CrackBerry.

Howard Rosenberg, a media critic and co-author of "No Time to Think: The Menace of Media Speed and the 24-hour News Cycle," has been watching the Haiti TV coverage - Cooper's in particular - and finds it unrealistic in its obsession with immediacy.

"It was as if caffeine had been pumped through his veins," Rosenberg says. Haiti, he says, is "a genuine need exacerbated by a logistical nightmare. But it's also a revved-up media whose pulse is beating faster than ever. And when their pulse beats this fast, so does everyone else's."

This plays out not just in disaster news, but everywhere in the public sphere. Not that long ago, an American president was given until midterm elections before being judged a success or failure. Now judgment is passed in a year, if not the first hundred days.

When Democrats lost Ted Kennedy's Massachusetts Senate seat to a Republican on Tuesday, a common theme sounded by pundits and the citizenry alike went something like this: Well, Obama's had a year and he hasn't fixed the economy or health care, and this loss is the result.

It's as if society at large is racing to follow Moore's Law, a theory that says the number of transistors you can fit onto an integrated circuit - and, by extension, the speed of a computer processor - doubles about every two years.

"The problem, of course, is that it isn't up to technology to distribute the contributions," says Lynn Schofield Clark, director of the Estlow International Center for Journalism and New Media at the University of Denver. "It's up to people, and people can't work as fast as technology can."

That truth, though, has a formidable opponent in public perception, which can be as difficult to overcome as physical obstacles. Consider the International Rescue Committee's TV commercial that aired on CNN Thursday. It urged viewers to contribute aid the convenient way - with their thumbs, via text message.

If only it were that easy.