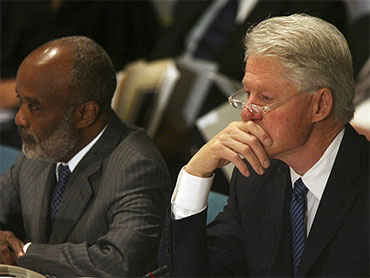 Countries and international organizations pledged nearly $10 billion on Wednesday to rebuild Haiti after January's earthquake, going far beyond the government's expectations and providing new hope to the impoverished nation.

U.N. Secretary-General Ban Ki-moon announced that nearly 50 donors pledged $9.9 billion "for the next three years and beyond," demonstrating that the international community had come together "dramatically and in solidarity with the Haitian people" to help them recover from the Jan. 12 earthquake.

Haiti had appealed for $3.8 billion for the next two years. The U.N. chief said the $9.9 billion includes pledges of $5.3 billion from governments and international partners for the first 24 months of reconstruction.

"We have made a good start," Ban told a news conference at the end of the daylong donors conference. "We need now to deliver."

U.S. Secretary of State Hillary Clinton, who co-chaired the conference, called the pledges "an impressive sum by any standard."

Haiti's President Rene Preval thanked donors, saying "this is a heartfelt effort that demonstrates that Haiti is not on its own."

The Haitian government estimates it will cost about $11.5 billion to repair and rebuild its infrastructure, reports CBS News chief national correspondent Byron Pitts. A quarter of that is needed now to provide education and job training - part of an effort to make Haitians self-sufficient.

The earthquake destroyed the government and commercial center of Haiti's capital, Port-au-Prince, killed between 217,000 and 300,000 people, and left an estimated 1.3 million people homeless.

The quake destroyed the government and commercial center of the capital, Port-au-Prince, killed more than 217,000 people and left an estimated 1.3 million people homeless.

In the first minutes of the conference, the United States and the European Union pledged more than two-thirds of the $5.3 billion Haiti requested.

Clinton announced the United States' pledge of $1.15 billion over the next two years. Catherine Ashton, the European Union foreign affairs chief, then announced the EU's pledge of 1.235 billion euros, equivalent to over $1.6 billion.

It was not immediately clear if all pledges were new money, as some delegates appeared to be describing existing aid projects.

Preval had asked donors to focus on education and help the country's 9 million people provide for their own future.

"Let us dream of a new Haiti whose fate lies in a new project for a society without exclusion, which has overcome hunger, in which all have access to secure shelter ... (and their) health needs provided," he told diplomats and ministers from more than 130 countries.

The idea of the summit was to put Haiti back on center stage after U.N. staff and workers from non-government organizations have complained that fundraising efforts have stalled and the public's initial attention has waned, reports CBS News foreign affairs analyst Pamela Falk.

The $3.8 billion Haiti is seeking for the next 18 months is just the initial part of a $11.5 billion package Preval's administration wants to rebuild schools, hospitals, courthouses and neighborhoods destroyed in when the magnitude-7 earthquake pulverized its capital on Jan. 12.

Haiti's government has detailed its plans for the money in a 55-page rebuilding plan that lays out the interim reconstruction committee. It includes requests for $350 million in direct budget support to the government, which Edmond Mulet, the top resident U.N. envoy there, said is crucial for the country's progress.

"We need Haiti to succeed," Clinton said. "What happens there has repercussions far beyond its borders."

She said the donors conference was not only to pledge financial support but "to offer support in a smarter way."

Possibly the most dramatic element of Haiti's reconstruction plan is a proposal to completely redistribute the nation's meager economic engine, and its population.

According to an article in The New York Times, a team of Haitian urban planners has crafted a proposal to literally scatter the disaster-prone capital city's inhabitants to smaller urban "growth poles".

Haiti's leaders must guide "a transparent recovery," Clinton stressed, and the international community must change its past practice of working around the government and ensure that it is working with the government.

There are more than 10,000 humanitarian organizations working in Haiti, Pitts reports, but so far it's unclear how the $2.6 pledged to those organizations is being spent. Rebuilding Haiti could take more than 10 years. And many donors are demanding transparency and accountability from the agencies collecting money.

Today's efforts are the "first real commitment from all the donors and international community to really try to get it right," Luis Alberto Moreno, President of the Inter-American Development Bank told CBS News.

At the core of the quake-ravaged country's request for help is the Interim Haiti Recovery Commission, or IHRC, which will be co-chaired by former U.S. President Bill Clinton and Haitian Prime Minister Jean-Max Bellerive.

The commission's two-dozen members will be tasked with coordinating and paying out the aid money expected to flow in. It is a key step to allaying donor concerns over Haiti's history of official corruption and political unrest who want assurances that the money will go where it is intended.

Its members include some Haitian legislators, local authorities, union and business representatives, and a delegate from the 14-nation Caribbean Community trade bloc. The board will also have a representative of each donor who is pledging at least $100 million over two years or $200 million of debt reduction - currently the United States, Canada, Brazil, France, Venezuela and European Union along with the Inter-American Development Bank, World Bank and United Nations.

The former U.S. president was tapped for the role earlier this week, Bellerive said. Clinton, who as U.N. special envoy to Haiti visited three times since the earthquake, will likely be spending much more time in the impoverished country in his new role.

In keeping with his work as U.N. special envoy, Bill Clinton pushed private investment at the conference.

Most notably he helped shepherd a $7.5 million project with the Coca-Cola Company to help mango producers supplying the "Haiti Hope Mango Lime-Aid" made by its Odwalla brand.

The board Clinton will help lead is a source of consternation among some Haitian lawmakers, who are now considering a legislative package submitted by Preval to approve the commission's authority. Opposition lawmakers are threatening to block the bill unless Preval's administration first publishes a report on how aid money was spent in the initial aftermath of the disaster.