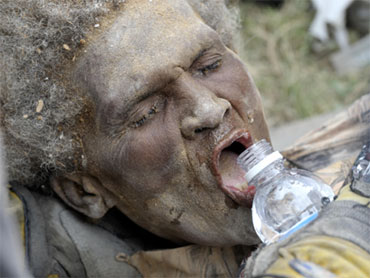 For information on how to donate to relief organizations click here.


7:37 p.m. ET: Wednesday on the "CBS Evening News" our team of correspondents in the field continued to deliver stirring images and stories from the aftermath of the Haiti quake.

Dr. Jennifer Ashton reported from on board the USNS Comfort the hospital ship with 1,000 beds and eight operating rooms that reached Haiti yesterday. Everywhere on board, medical teams asked Ashton about conditions on the ground and the clinic where she's been working this week.

And Harry Smith reports on life inside a tent city for survivors. "There's a kind of commerce, a sense that life is going on somehow," he writes. "The people here have such resilience and pride. In the middle of this makeshift camp, a woman is doing her laundry clearly. And she is ironing a pair of pants." 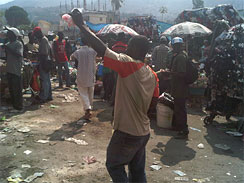 (CBS)
5:20 p.m. ET: CBS News' Peter King writes about his grim trip out of the Haitian capital in our World Watch blog. King describes the menacing feeling as men armed with knives and makeshift weapons like metal pipes roam the streets and also the variety of vendors trying to sell what they have to the crowds of people trying to escape the city at an out-of-town bus terminal.

4:34 p.m. ET: CNN has the story of a 5-year-old boy pulled out of the rubble after eight days buried.

Doctors say attributed the boy's survival to resilience and the strength of his young body. It is unclear whether the boy had any access to food or water. He was being treated at a hospital for severe dehydration.

The boy's mother was killed in last week's earthquake and his father is still missing.

4:24 p.m. ET: Secretary of State Hillary Clinton spoke at press briefing Wednesday afternoon about the continuing relief effort and allowing orphaned children already in the process of being adopted into the U.S. under a policy known as humanitarian parole. (There are at least 500 orphans in this group.)

On the orphans issue she said the State Department is doing everything it can to locate these children and expedite their travel to the U.S., including working with members of Congress and consulting with Haitian pres Preval.

"We will not let red tape stand in the way of those in need," she said.

She called the relief work so far in Haiti "a heroic effort." "It's really remarkable how much has gotten done," in light of the huge logistical challenges, she said.

-The U.S. has 43 urban search and rescue teams on the ground, including seven currently working at the Hotel Montana. So far at least 122 people have been rescued.

-There have been 33 confirmed fatalities of U.S. citizens in Haiti, including one diplomatic official. There American officials remain unaccounted for.

-The U.S. is hoping to open an airfield today at Jacmel, a port city southeast of Port-au-Prince to ease the congestion at the capital's airport. We are also operating flights in and out of an airfiled in the Dominican Republic.

-The U.N. mission in Haiti, MINTUSHA, has returned to 80 percent operational strength

But there's more bad news for the people of Haiti. Experts say today's aftershock is very unlikely to be the last and that equally large and damaging tremors remain possible as the underlying rock layers continue to adjust following last week's quake.

"They will be less and less frequent, but large ones can still strike," he said. So buildings are still at risk, especially those already weakened," Eric Calais, an earthquake expert at Purdue University told the Associated Press.

Calais also said the fault zone responsible for last week's quake extends into the neighboring nation, the Dominican Republic. It's "somewhat of a concern to us" that that the Haiti quake may have raised the chances for a quake there. The two countries share the island of Hispaniola.

12:50 p.m. ET: The House has passed a bill allowing taxpayers to write off donations to Haiti earthquake relief efforts when they file their 2009 taxes this spring. Under current law, donors would have to wait until they file their 2010 returns next year to take the deductions. The bill would allow donations made by the end of February to be deducted from 2009 returns.

11:19 a.m. ET A Marine Amphibious Ready Group is being sent to Haiti – three ships with 4,000 sailors and Marines on board, David Martin reports. The Nassau, Mesa Verde and Ashland are currently loading Marines at Morehead City, N.C. for a scheduled deployment to the Persian Gulf. They have now been diverted to Haiti.

11:04 a.m. ET: The U.S. military prepared to enter an area south of the quake-ravaged capital that has not yet been searched where as many as 800,000 people are living.

"These are areas no one has eyes on yet," the official said, and there are believed to be as many as 800,000 people living there. This is the area the Marines are moving into."

10:23 a.m. ET: An early warning system under development could provide residents of earthquake-prone California with enough time for conductors to stop trains, students to crouch under desks and pedestrians to get away from unsafe structures before the ground begins to rumble.

Scientists at the University of California hope their five years of experiments and research will lead to an alarm system in at least three years that will provide as much as a 60-second warning before a quake strikes somewhere in the Golden State, the San Francisco Chronicle reported Wednesday.

10:02 a.m. ET: As CBS station WCBS reports, New York is home to tens of thousands of Haitians, who are not all documented. City officials are taking steps to offer them help, while their homeland struggles to recover and rebuild from the quake.

Haitians across America are lining up for help applying for Temporary Protected Status or "TPS."

9:18 a.m. ET: "Early Show" co-anchor Harry Smith visits a camp where Sebastian, the man who served as his guide while he was in Haiti, lives. Smith marvels at the sprit of the people, and how life is going on for them, even in the face of tragedy. or some such thing.

Click below to watch Smith's report on Port-Au-Prince when night falls:

8:42 a.m.ET: AP: Doctors aboard the USNS Comfort have begun
treating their first patients in Haiti. The nearly 900-foot floating hospital is expected to arrive near Port-au-Prince by mid-morning Wednesday, but the ship was close enough Tuesday night to take aboard its first patients.

6:15 a.m. ET: USGS has registered a 6.1 magnitude aftershock 36 miles west of Port-au-Prince. CBS News teams in Haiti teams felt the ground shake as far away as Petionville but there is no visible damage reported as of yet. The tremors reportedly sent people running into the streets.

6:15 a.m. ET: A 69-year-old ardent Roman Catholic who said she prayed constantly during her week under the rubble and two children saved by a New York rescue team were among the unlikely survivors of the epic Haitian earthquake. One full week after the magnitude-7 quake killed an estimated 200,000, left 250,000 injured and made 1.5 million homeless, search-and-rescue teams were emerging from the ruins with improbable success stories. Experts have said that without water, buried quake victims were unlikely to survive beyond three days.

Watch: Boy, Girl Rescued after a Week in Rubble:

From Tuesday Night: CBS News continue to deliver round-the-clock updates from on the ground in Haiti and around the world. On Tuesday's "CBS Evening News," medical correspondent Dr. Jennifer Ashton reported on the difficult life-and death choices being made every day at the 13 hospitals now open in Port-au-Prince.

David Martin in Washington continued his weeklong coverage of the U.S. military's efforts in Haiti. Air drops have proven effective in getting needed aid into the country but they can't be conducted without troops on the ground to secure drop sites and distribute the aid. Troops and equipment are still trickling in by ship and through the bottlenecked airport.

And Byron Pitts and his crew delivered harrowing images and accounts of the violence on the streets of the capital - with looters wielding knives and rudimentary weapons - and the risk to citizens from the 3,000 inmates who escaped the national prison, taking weapons, killing guards, and setting the decimated prison building on fire as they went.