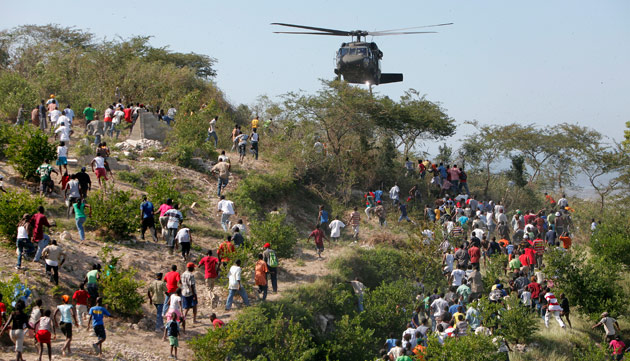 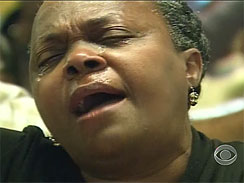 (CBS)
The entire CBS News team delivered written and video updates of the devastation in Haiti Sunday. On the "CBS Evening News with Katie Couric," Seth Doane reported on a family living on the street with a 14-month-old baby and the struggle to get needed aid, including clean drinking water.

Manuel Gallegus had the story of the growing number of Haitian orphans and the struggle of adoptive parents in the United States to get their adopted children out of the country before any more harm can come to them.

Randall Pinkston reported from Brooklyn, N.Y. on the powerful mourning and hope at Haitian-American church services in New York and Miami – and the solidarity expressed at Sunday worship around the world.

CBS News foreign affairs analyst Pamela Falk, based at the United Nations, wrote about the challenge ahead for U.S. policymakers both in assuring that aid is distributed fairly and without the taint of corruption, and in dealing with a potential flood of refugees.

And on "60 Minutes" Byron Pitts reported on the efforts of the U.S. Army's 82nd Airborne Division – including a Haitian-American soldier – to help rescue, feed and protect the citizens of the earthquake decimated country. 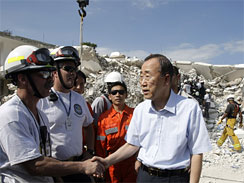 (AP Photo/Francois Mori)
U.N. Secretary-General Ban Ki-moon made an emotional tour of his staff's devastated headquarters Sunday and met with earthquake survivors desperate for food and shelter, telling them not to give up as international aid workers scramble to deliver help.

"I am here with a message of hope that help is on the way," Moon told a group of men and boys who had gathered in front of the severely damaged National Palace and were shouting that they needed food, water and work.

Ban said he has three priorities in Haiti: saving as many lives as possible, stepping up humanitarian assistance and ensuring the co-ordination of the huge amount of aid coming into the country.

"We should not waste even a single item, a dollar," he said.

Ban said the U.N. is feeding 40,000 people, and expects that figure to rise to 2 million within a month.

5:40 p.m. ET:
Couric: The Human Face of Haitian Tragedy
CBS Evening News anchor Katie Couric blogs about the devastation she saw while reporting and anchoring "The CBS Evening News" in Port-au-Prince. Couric is haunted by the 13-year-old orphan boy whose hand she held as he screamed in pain while Belgian physicians set his broken leg. 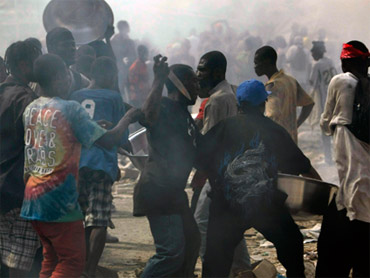 Providing humanitarian aid requires a safe and secure environment, said Lt. Gen. Ken Keen of the U.S. Southern Command. While streets have been largely calm, he said, violence has been increasing.

"We are going to have to address the situation of security," Keen said. "We've had incidents of violence that impede our ability to support the government of Haiti and answer the challenges that this country faces."

While there he will also meet with President Rene Preval and other members of the Haitian government and the international community to discuss the way forward, as well as visit with personnel and volunteers on the ground.

"As UN Special Envoy for Haiti, I feel a deep obligation to the Haitian people to visit the country and meet with President Preval to ensure our response continues to be coordinated and effective," President Clinton said. 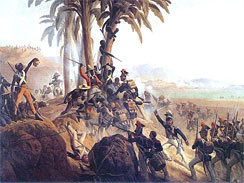 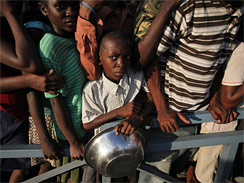 2:42 p.m. ET:
A mile from the Port-au-Prince airport where international relief efforts are ramping up, residents of a nursing home for the elderly are lying on mattresses or the ground dying of thirst and hunger

1:20 p.m. ET:
U.N. Secretary-General Ban Ki-moon has arrived in Haiti to support relief efforts in the earthquake-hit nation, the AP reports. Ban arrived Sunday on a charter Boeing 737 and was met by the acting chief of the U.N. peacekeeping mission, Edmond Mulet.

His first stop is going to be the five-story U.N. headquarters that collapsed in the quake, burying U.N. mission chief Hedi Annabi and many others. Annabi's body was found Saturday. Ban also will take an aerial tour of the country's most-damaged areas. 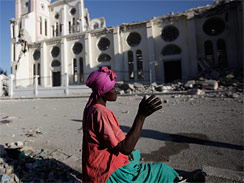 (AP)
12:45 p.m. ET:
Amidst the earthquake's rubble in Haiti, the faithful gathered Sunday to give thanks to God. As Catholic and Protestant worshippers across the city met for their first Sunday services since the magnitude-7.0 quake, many Haitians were still waiting for food and water and some took vengeance against looters.

12:20 p.m. ET:
Update: Over 70 people have been rescuedfrom the rubble of Haitian earthquake - an unusually high success rate in an otherwise extremely challenging relief operation, a U.N. spokeswoman said Sunday. Many Haitians were still unable to obtain food and clean water Sunday, but the aid workers have made progress in getting food, water and supplies into the Caribbean country and have started distribution to people in the heavily damaged capital Port-au-Prince, said Elisabeth Byrs.(AP)

11:30 a.m. ET:
According to a press release, the USS Normandy has arrived off the coast of Port-Au-Prince to "support Operation UNIFIED RESPONSE, the joint U.S. military relief effort for earthquake victims."

"Normandy, home ported in Norfolk, Va., will support relief efforts by providing air surveillance for the heavy air traffic in the area. The ship will also act as a ready deck, or an at sea platform able to accept helicopters on deck and provide refueling services."

9:00 a.m. ET:
CBS News has learned that the Port of Gonaves is now operational - other piers including Lafiteau and Aubry are still being assessed for use and not functional at this time.

754 Americans had been evacuated by the 16th. The total number of U.S. citizens evacuated to date is now 1,958. There are 472 Americans currently at the embassy.

23 individuals had been rescued as of Friday. The UN Office of Coordination of Humanitarian Affairsreports that 58 people have been rescued as of 6am 1/17 by the 27 Int'l Search and Rescue Teams (SAR) in Haiti. This does not count any rescues made by Haitian civilians.

The President of Senegal is prepared to offer land to any Haitians willing to resettle there calling "it part of their native earth."

The U.S. Coast Guard Cutter Oak is scheduled to arrive today. 964 U.S. Military personnel are currently on the ground in Haiti.

8:45 a.m. ET:
U.N. Secretary-General Ban Ki-moon is on his way to Haiti to discuss how to support relief efforts in the earthquake-hit nation.

Ban told reporters before his departure Sunday morning that he has three priorities in Haiti: saving as many lives as possible, stepping up humanitarian assistance and ensuring the coordination of the huge amount of aid coming into the country.

"We should not waste one dollar of aid," Ban said.(AP)

7:15 a.m. ET:
More than four days after the Haitian earthquake, . Onlookers applauded as Nadine Cardoso was lowered from a hill of debris on a stretcher early today. Her husband called it "a little miracle," and described his wife as "one tough cookie." She's said to be dehydrated, but otherwise unhurt.

Elsewhere in Port-au-Prince, rescue workers are still trying to reach three people deep in the pancaked ruins of a multistory supermarket. Rescuers have been able to get water to them. Seven other survivors were pulled out from under collapsed buildings on Friday.

Getting aid to those who need it remains difficult and slow, but does seem to be picking up. U.N. Secretary-General Ban Ki-moon is expected in Haiti today to discuss aid delivery.