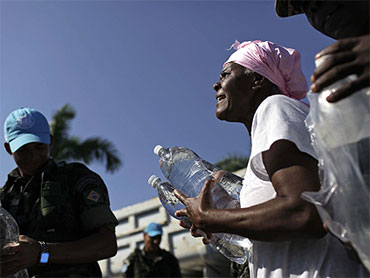 Haitians are fleeing their quake-ravaged capital by the hundreds of thousands, aid officials said Friday, as their government promised to help nearly a half-million more move from squalid camps on curbsides and vacant lots into safer, cleaner tent cities.

Doctors said a 69-year-old woman was pulled from the wreckage of a building on Friday, 10 days after the magnitude-7.0 quake, but some teams were giving up the search and efforts focused on expanding aid for survivors.

Aid officials said some 200,000 people have crammed into buses, nearly swamped ferries and set out even on foot to escape the ruined capital. For those who stay, foreign engineers have started leveling land on the fringes of the city for tent cities, supposedly temporary, that are meant to house 400,000 people.

The goal is to halt the spread of disease at hundreds of impromptu settlements that have no water and no place for sewage. Homeless families have erected tarps and tents, cardboard and scrap as shelter from the sun, but they will be useless once the summer rainy season hits.

The new camps "are going to be going to places where they will have at least some adequate facilities," Fritz Longchamp, chief of staff to President Rene Preval, told The Associated Press on Thursday.

Doctors treating the newly rescued woman said she was in bad shape after being trapped for so long.

"There is very little hope, but we are trying to save her life," Dr. Ernest Benjamin told The Associated Press.

Doctors at Haiti's General Hospital were treating the woman with oxygen and intravenous fluids.

The rescue comes as Haiti prepared to wind down its search and rescue operation, government sources told CBS News.

Thursday was the first day since the quake in which nobody was pulled alive from the ruins, U.N. mission spokesman David Wimhurst said.

"We all hope that others have survived and can be found, but the more days that go by without signs of life, the dimmer these hopes will become," he said.

Some U.S. search-and-rescue (SAR) teams will continue to operate, including at the Hotel Montana.

Armies of foreign aid donors, instead, turned their attention to expanding their pipeline of food, water and medical care for survivors.

With extensive swaths of Port-au-Prince in ruins, more than 500 makeshift settlements with a population of about 472,000 are now scattered around the capital, said Jean-Philippe Chauzy, spokesman for the Geneva-based International Organization for Migration. Getting them to safer quarters could take weeks.

"These settlements cannot be built overnight. There are standards that have to be designed by experts. There is the leveling of the land, procurement and delivery of tents, as well as water and sanitation," said Vincent Houver, the IOM's mission chief in Haiti.

The move will be voluntary and temporary, according to Elisabeth Byrs, the spokeswoman for the U.N.'s Office for the Coordination of Humanitarian Affairs in Geneva.

"It's to help them in a first move. After, the people will decide if they want to stay," she said.

Many people are just trying to get out of the capital, often back to the farms or provincial homes of relatives.

The U.S. Agency for International Development said Friday that as many as 200,000 Haitians have fled the capital and many more are trying to do so.

Computer teacher Daniel Dukenson walked across the capital and caught a bus to take his family from their collapsed home in a slum to crowd in with a cousin in the seaside town of St. Marc, a two-hour journey away.

"I'd like to go back, but it's going to take a lot of time for Port-au-Prince to get back on its feet. Two years, maybe," the 28-year-old told The Associated Press by telephone. He said he hopes to make a living teaching English.

Still others have tried to flee abroad. The U.S. Embassy on Friday turned away hundreds of people seeking a trip out on the planes that have dropped off aid. Scores of U.S. citizens were given passes, but many were told officials were overwhelmed and they would have to return later.

U.S. officials have warned Haitians against trying to reach Florida illegally, and people in the Dominican Republic seemed wary that the flow of aid through their border to Haiti would be accompanied by refugees coming the other way.

Radio stations broadcast reports that people had spotted Haitians entering illegally in buses or ambulances and an AP reporter saw more than half a dozen army, police and other checkpoints where Dominican officials were searching incoming cars.

Haiti's government estimates the Jan. 12 quake killed 200,000 people, as reported by the European Commission. It said 250,000 people were injured and 2 million homeless in the nation of 9 million. Others offer smaller estimates.

The disaster has prompted what the Red Cross calls the greatest deployment of emergency responders in its 91-year history. Nations around the world have offered what they can: more than $500 million from European nations, money even from impoverished Chad and Congo, and a ton of tea from Sri Lanka.

The U.N.'s World Food Program said it has distributed more than 1.4 million food rations - each with three meals, and has a fleet of trucks in bringing food and supplies.

"We are planning to flood the country with food," Myrta Kaulard, the agency's Haiti director, told the AP.

To speed that flood, the U.S. Army, Navy and Coast Guard are trying to patch up the Haitian capital's only functional industrial pier, which is key to getting in large aid shipments as well as to Haiti's long-term recovery.

Only four ships have been able to dock at the pier, where 15-inch-wide cracks make it risky to let more than one truck work at a time, and damage is so extensive that military officials say they don't know how long it will take before ships can dock and unload in large quantities.

"I wouldn't even ask my workers to risk it. I don't trust it," said Georges Jeager Junior, a businessman who plans to shift his port operations to the northern city of Cap Haitien, a 12-hour journey over bad roads from the capital. Jeager Junior said that means prices will soar.

Damage at the country's badly damaged main oil terminal has kept any tankers from landing since the quake, so gas stations on fuel trucked in from the Dominican Republic.

On the waterfront Thursday, sporadic rounds of gunfire echoed from the nearby downtown commercial area. Scavengers continued to rampage through collapsed and burning shops. U.S. troops patrolled nearby to protect aid convoys, but were leaving policing to Haitian and U.N. forces.

At a building in the Carrefour neighborhood, where the multi-faith Eagle Wings Foundation of West Palm Beach, Florida, planned to distribute food, stick-wielding quake victims from a nearby tent camp stormed the stores and made off with what the charity's Rev. Robert Nelson said were 50 tons of rice, oil, dried beans and salt. Fights broke out as others stole food from the looters.

At the south of Haiti's main bay, near the earthquake's epicenter, the U.S. Navy and Coast Guard - which together have put 20 ships into the relief effort - set up a triage center amid the rusting motorboats, with dozens of military doctors treating the most urgent casualties on the lawn.

"The injured seem to just keep showing up," said Navy Lt. Cmdr. Chris Worth. "We've been working from dawn to dusk since getting here."

Emergency medical centers almost everywhere were swamped with patients critically injured by the quake. There were dire shortages of surgeons, nurses, medicines and medical tools.

Doctors said patients were dying of sepsis from untreated wounds.

"A large number of those coming here are having to have amputations, since their wounds are so infected," said Brynjulf Ystgaard, a Norwegian surgeon at a Red Cross field hospital.