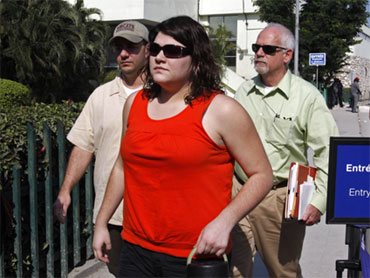 One of two U.S. Baptist missionaries still held on kidnapping charges in Haiti was released Monday, but the group's leader remained in custody.

Charisa Coulter was taken from her jail cell to the airport by U.S. Embassy staff more than a month after she and nine other Americans were arrested for trying to take 33 children out of Haiti after the earthquake.

Coulter told CBS News at the airport in Haiti, just before boarding her flight home, that she had "learned a lot" through her experience, and she wouldn't soon forget the lessons.

She said it "feels wonderful" to be released and that she was looking forward to the group's leader, Laura Silsby, "getting out soon."

"It's hard to leave her here, but I need to continue with what God needs me to do," Coulter told CBS News.

Defense attorney Louis Ricardo Chachoute said she was released because there was no evidence to support the charges of kidnapping and criminal association. He predicted Silsby would be released soon as well.

"There are no prosecution witnesses to substantiate anything," Chachoute said.

Coulter, of Boise, Idaho, is a diabetic, and had medical difficulties during her confinement. She was treated at least once on Feb. 1 by American doctors after collapsing with what she said was either severe dehydration or the flu.

Silsby, the leader of the Idaho-based missionaries, was in another part of the city - in a closed hearing before the judge who had previously said he expected to release the two Americans.

The Americans, most from Idaho, were detained on Jan. 29 while trying to leave the country without proper documents to remove the children. Their arrest came as Haitian authorities were trying to crack down on unauthorized adoptions to prevent child trafficking in the chaos following the catastrophic Jan. 12 earthquake.

Silsby initially said the children were orphaned in a quake that the government said has killed more than 230,000 people. But it was later found that the children had been given away by still-living parents.

The group planned to take the children to the neighboring Dominican Republic to an orphanage Silsby was creating in a former hotel.

The judge released eight of the Americans on Feb. 17 after concluding the parents voluntarily gave up their children in the belief that the Americans would give them a better life. But he decided that he still had additional questions for Silsby and Coulter.