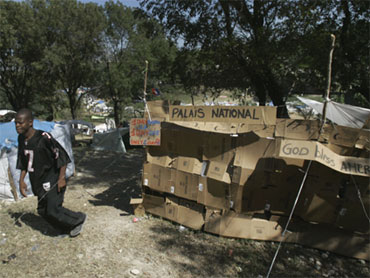 Haiti's government has declared the search and rescue phase for survivors of the earthquake over, the United Nations said Saturday, saying there was little hope of finding more people alive 10 days after quake.

The U.N. statement comes the day after an Israeli team reported pulling a man out of the debris of a two-story home and relatives said an elderly woman had been rescued.
The Office for the Coordination of Humanitarian Affairs said that 132 people were pulled from the rubble alive by international search and rescue teams since the Jan. 12 disaster.

Spokeswoman Elizabeth Byrs told The Associated Press that rescue teams still searching through the rubble would not be prevented from carrying out whatever work they felt necessary. "It doesn't mean the government will order them to stop. In case there is the slightest sign of life, they will act."

But she added: "Except for miracles, hope is unfortunately fading."

Humanitarian relief efforts are still being scaled up in the capital Port-au-Prince, Jacmel, Leogane and other areas affected by the quake, Byrs said.

An Israeli military spokeswoman said Saturday no decision had yet been taken to halt their search and rescue operations.

The Israeli delegation was initially intended to be in Haiti for two weeks. However the spokeswoman, who could not be named citing military regulations, said it was continuously assessing the situation to see whether they should continue or not.

There are signs the country is reviving, reports Whitaker. There are still empty stalls in the main market, but merchants and customers are coming back. The offerings are meager, but the spirit is robust.

President Rene Preval's administration was working with the United Nations Development Program and other aid groups to restore electricity and telecommunications, reopen banks, businesses and money-transfer houses, and to provide at least low-paying jobs to Haitians desperate for income.

When no survivors were found the ninth day after the quake, rescue workers started losing hope. But on Day Ten, two survivors were pulled from the wreckage. 22-year-old Buto Emanuel was rescued from the rubble of a three-story building.

In an interview with The Associated Press, he described coming out of the shower when the quake hit: "I felt the house dancing around me. I didn't know if I was up or down."

He told of passing out in the rubble, dreaming at times that he could hear his mother crying. The furniture in his room had collapsed around him in such a way that it created a small space for him amid the ruins of the house. He had no food. When he got desperately thirsty, he drank his urine.

"I am here today because God wants it," Emanuel said.
"I don't know how he survived, but I don't care - he survived!" one of the rescue workers told CBS News correspondent Bill Whitaker.

Even more astounding: 84-year-old Marie Carida Romain was found in the debris of her house. Her children heard moaning, and freed her after 20 hours of digging with their bare hands. Doctors can barely believe it.

Dr. Robert Norris, of the International Medical Corp said, "She has some chances, which is excellent."

This caps off a week of miracles. Kiki Joachin was found alive on day eight and embraced his wife and his rescuers. Moments later his sister Sabrina was rescued. Kiki said God helped him survive.

Sabrina said another brother died right next to her, begging for water.

Rescuers said they were encouraged but all too aware that few trapped people can survive for that long.
"Statistically you can say that the chances of survival is very low," said Fernando Alvarez Bravo, a representative in Mexico for rescue crews founded during the 1985 Mexico City earthquake, and still at work in Haiti on Friday. "But the hope it gives the population to recover and find their loved ones helps them to recover quickly. They don't feel abandoned."

The rescues came two days after many international search teams began packing up their gear and other aid groups remained to grapple with challenges of helping survivors.

In the three miles or so between Port-au-Prince and hard-hit Carrefour, satellite images show 691 blockages on the road - collapsed houses or other debris - the U.N. reported.

The 7.0-magnitude quake killed an estimated 200,000 people, according to Haitian government figures cited by the European Commission. Countless dead remained buried in thousands of collapsed and toppled buildings in Port-au-Prince, while as many as 200,000 have fled the city of 2 million, the U.S. Agency for International Development reported.

About 609,000 people are homeless in the Port-au-Prince metropolitan area, and the United Nations estimates that up to 1 million people could leave Haiti's destroyed cities for rural areas already struggling with extreme poverty.

On Saturday, some are expected to gather for the funeral of the archbishop of Port-au-Prince, Msgr. Joseph Serge Miot, near the ruins of his cathedral.

Far away, during an internationally broadcast telethon.

Scores of aid organizations, big and small, have stepped up deliveries of food, water, medical supplies and other aid to the homeless and other needy in seaside city. But obstacles remained at every turn to getting help into people's hands.

"I want to leave but I don't have any money. I don't know where to go," said Demonere Mirlande, a 33-year-old mother who lost her home but survived along with her three young children.