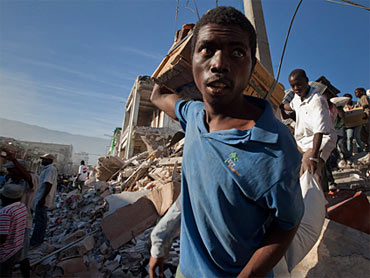 The river of supplies flooding the airport is beginning to trickle out to the three million Haitians who need help.

The U.S. Navy makes dozens of deliveries every hour. The drop takes just seconds otherwise the crew risks being mobbed by desperate Haitians.

Like everything else in Port-au-Prince, patience is running out, reports CBS News Correspondent Jeff Glor. In some places, looters have begun raiding supplies, but despite the overwhelming misery there are still miracles.

Nearly three days after the earthquake, a 16-month-old girl named Winnie was pulled from the debris and placed into the arms of an uncle. The rest of her family was still trapped below.

The cries for help coming from the rubble have become fewer and fainter.

Although two dozen of the world's best search and rescue teams are here, most digging is being done by hand, and those who are saved must wait hours for medical attention. The wounded must comfort themselves with prayer or song.

For many thousands killed by this catastrophe, there is no dignity. They are laid to rest under the open sky in roadside ditches or dropped in the city dump.

For those still alive, precious water, food and early glimmers of hope began reaching them Saturday on the streets of the shattered capital, where despair at times turned into a frenzy among the ruins.

"People are so desperate for food that they are going crazy," said accountant Henry Ounche, in a crowd of hundreds who fought one another as U.S. military helicopters clattered overhead carrying aid.

When other Navy choppers dropped rations and Gatorade into a soccer stadium thronged with refugees, 200 youths began brawling, throwing stones, to get at the supplies.

Across the hilly, steamy city, where people choked on the stench of death, hope faded by the hour for finding many more victims alive in the rubble, four days after Tuesday's catastrophic earthquake.

Still, here and there, the murmur of buried victims spurred rescue crews on, even as aftershocks threatened to finish off crumbling buildings.

"No one's alive in there," a woman sobbed outside the wrecked Montana Hotel. But hope wouldn't die. "We can hear a survivor," search crew chief Alexander Luque of Namibia later reported. His men dug on. Elsewhere, an American team pulled a woman alive from a collapsed university building where she had been trapped for 97 hours. Another crew got water to three survivors whose shouts could be heard deep in the ruins of a multistory supermarket that pancaked on top of them.

Nobody knew how many were dead. Haiti's government alone has already recovered 20,000 bodies - not counting those recovered by independent agencies or relatives themselves, Prime Minister Jean-Max Bellerive told The Associated Press.

In a fresh estimate, the Pan American Health Organization said 50,000 to 100,000 people perished in the quake. Bellerive said 100,000 would "seem to be the minimum." Truckloads of corpses were being trundled to mass graves.

A U.N. humanitarian spokeswoman declared the quake the worst disaster the international organization has ever faced, since so much government and U.N. capacity in the country was demolished. In that way, Elisabeth Byrs said in Geneva, it's worse than the cataclysmic Asian tsunami of 2004: "Everything is damaged."

Also Saturday, Secretary of State Hillary Rodham Clinton flew to Port-au-Prince to pledge more American assistance and said the U.S. would be "as responsive as we need to be." President Obama met with former President George W. Bush and former President Clinton and urged Americans to donate to Haiti relief efforts.

As the day wore on, search teams recovered the body of Tunisian diplomat Hedi Annabi, the United Nations chief of mission in Haiti, and other top U.N. officials who were killed when their headquarters collapsed.

Despite many obstacles, the pace of aid delivery was picking up.

The Haitian government had established 14 distribution points for food and other supplies, and U.S. Army helicopters were reconnoitering for more. With eight city hospitals destroyed or damaged, aid groups opened five emergency health centers. Vital gear, such as water-purification units, was arriving from abroad.

Thousands lined up in the Cite Soleil slum as U.N. World Food Program workers distributed high-energy biscuits there for the first time. As the hot sun set, the crew was down to just a few dozen boxes left from six truckloads. Perhaps 10,000 people were still waiting patiently, futilely, in line.

Seven months' pregnant, and with two children, 29-year-old Florence Louis clutched her four packets. "It is enough, because I didn't have anything at all," she said.

On a hillside golf course, perhaps 50,000 people were sleeping in a makeshift tent city overlooking the stricken capital. Paratroopers of the U.S. 82nd Airborne Division flew there Saturday to set up a base for handing out water and food.

After the initial frenzy among the waiting crowd, when helicopters could only hover and toss out their cargo, a second flight landed and soldiers passed out some 2,000 military-issue ready-to-eat meals to an orderly line of Haitians.

More American help was on the way: The U.S. Navy hospital ship Comfort steamed from the port of Baltimore on Saturday and was scheduled to arrive here Thursday. More than 2,000 Marines were set to sail from North Carolina to support aid delivery and provide security.

But for the estimated 300,000 newly homeless in the streets, plazas and parks of Port-au-Prince, help was far from assured.

"They're already starting to deliver food and water, but it's mayhem. People are hungry, everybody is asking for water," said Alain Denis, a resident of the Thomassin district.

Denis's home was intact, and he and his elderly parents have some reserves, but, he said, "in a week, I don't know."

Aid delivery was still bogged down by congestion at the Port-au-Prince airport, quake damage at the seaport, poor roads and the fear of looters and robbers.

The problems at the overloaded airport forced a big Red Cross aid mission to strike out overland from Santo Domingo, almost 200 miles away in the Dominican Republic. The convoy included up to 10 trucks carrying temporary shelters, a 50-bed field hospital and some 60 medical specialists.

"It's not possible to fly anything into Port-au-Prince right now. The airport is completely congested," Red Cross spokesman Paul Conneally said from the Dominican capital.

Another convoy from the Dominican Republic steered toward a U.N. base in Port-au-Prince without stopping, its leaders fearful of sparking a riot if they handed out aid themselves.

The airport congestion touched off diplomatic rows between the U.S. military and other donor nations.

France and Brazil both lodged official complaints that the U.S. military, in control of the international airport, had denied landing permission to relief flights from their countries.

Defense Minister Nelson Jobim, who has 7,000 Brazilian U.N. peacekeeping troops in Haiti, warned against viewing the rescue effort as a unilateral American mission.

The squabbling prompted Haitian President Rene Preval, speaking with the AP, to urge all to "keep our cool and coordinate and not throw accusations."

A commercial-sized jet landed with rescue and medical teams from Qatar, only to find problems offloading food aid. They asked the U.S. military for help, surgeon Dr. Mootaz Aly said, and were told: "We're busy."

As relief teams grappled with on-the-ground obstacles, the U.S. leadership promised to step up aid efforts. In Washington, Mr. Obama joined with his two most recent White House predecessors to appeal for Americans to donate to the cause.

"We stand united with the people of Haiti, who have shown such incredible resilience," he said.

Their resilience was truly being tested, however.

On a back street in Port-au-Prince, a half-dozen young men ripped water pipes off walls to suck out the few drops inside. "This is very, very bad, but I am too thirsty," said Pierre Louis Delmar.

Outside a warehouse, hundreds of desperate Haitians simply dropped to their knees when workers for the agency Food for the Poor announced they would distribute rice, beans and other supplies. "They started praying right then and there," said project director Clement Belizaire.

Children and the elderly were asked to step first into line, and some 1,500 people got food, soap and rubber sandals until supplies ran out, he said.

The aid official was overcome by the tragic scene. "This was the darkest day of everybody living in Port-au-Prince," he said.

The World Health Organization has said eight hospitals in Port-au-Prince were destroyed or damaged, severely curtailing treatment available for the injured.

Hundreds of Haitians fled east toward the Dominican Republic for care. More than 300 earthquake victims were crammed into a 30-bed hospital in the border town of Jimani, many sharing mattresses along crowded corridors, theiir arms drinking up IV fluids.

"The only thing left is to pray for God to save my son," said a weeping Jean-Paul Dieudone, who came to the border seeking help for his 6-year-old son after his wife and other son died in the earthquake.

Officials said damage to the seaport also is a problem for bringing in aid. The arrival Friday of the aircraft carrier USS Carl Vinson helped immediately by taking pressure off the airport. Within hours, an 82nd Airborne Division rapid response unit was handing out food, water and medical supplies from two cargo pallets outside the airport.

Others tried to help in smaller ways.

Milero Cedamou, the 33-year-old owner of a small water delivery company, twice drove his small tanker truck to a tent camp where thousands of homeless people are living. Hundreds clustered around to fill their plastic buckets.

"This is a crisis of unspeakable magnitude; it's normal for every Haitian to help," Cedamou said. "This is not charity."

Medical teams from a dozen other nations set up makeshift hospitals to tend to the critically injured - who were still appearing.

"We have the hope we can find more people," said Chilean Maj. Rodrigo Vasquez, whose teams were trying to save those trapped at the Hotel Montana. But others weren't as hopeful. One Haitian woman sitting outside of the destroyed hotel spoke on her cellphone and sobbed. "No one's alive in there," she said in Creole.

And soon, it will be too late in any case.

"Beyond three or four days without water, they'll be pretty ill," said Dr. Michael VanRooyen of the Harvard Humanitarian Initiative in Boston. "Around three days would be where you would see people start to succumb."

Still, there were improbable triumphs.

"It's a miracle," said Anne-Marie Morel, raising her arms to the sky after a neighbor was found alive in the rubble of a home. If one person could be resuscitated from the utter destruction of this street, there remained hope that many others could still be found alive, she said.

"Nonsense, there is no God and no miracle," shouted back Remi Polevard, another neighbor, who said his five children were somewhere under the nearby debris.

"How could he do this to us?" Polevard yelled.