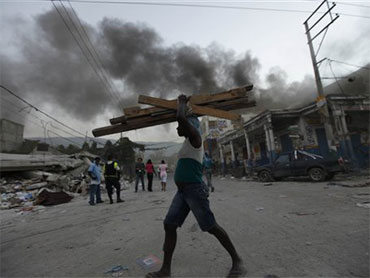 The collapse of much of Haiti's capital has a large part of the nation struggling just to find a place to sleep.

As many as 1 million people - one person in nine across the entire country - need to find new shelter, the United Nations estimates, and there are too few tents, let alone safe buildings, to put them in.

That leaves about 700,000 other people living on the streets around Port-au-Prince under whatever they can salvage. In the case of Jean Anthony's family, that's a blue plastic tarpaulin for a ceiling and a faded pink sheet with a floral print border for two walls.

"I'm not sure what you'd call it, but it's much more than terrible," said Anthony, the 60-year-old owner of a collapsed restaurant. Thousands of people were camped around him Monday across from the National Palace, amid piles of trash and the stench of human waste.

"We live like dogs," said Espiegle Amilcar, an unemployed 34-year-old who has been living under a sheet of plastic nearby.

Complete Coverage: The Road to Recovery in Haiti
How to Help Victims

Even with the outpouring of donations from around the world, recovery here won't be swift. That's why the country has focused on the miracles - the survivors pulled from the rubble, CBS News correspondent Bill Whitaker reports.

Aid organizations say they are collecting tents, but few so far are in evidence. And the International Organization for Migration, an intergovernmental agency, says it could take experts weeks to search out suitable sites for enough tent cities to hold earthquake refugees.

Vincent Houver, the Geneva-based agency's chief of mission in Haiti, said Sunday that the agency's warehouse in Port-au-Prince holds 10,000 family-size tents, but he estimates 100,000 are needed.

The organization has appealed for $30 million to pay for tents and other aid needs and has received two-thirds of that so far, he said.

Haiti's government wants many of the homeless to leave the capital city of 2 million people, to look for better shelter with relatives or others elsewhere. Officials estimate that about 235,000 have taken advantage of its offer of free transport to leave the city, and many others left on their own, some even walking.

An estimated 50,000 to 100,000 have returned to the region around the coastal city of Gonaives in northern Haiti, a city abandoned by many after two devastating floods in six years.

"Living in Port-au-Prince is a problem. Going to Gonaives is another problem," said Maire Delphin Alceus. "Everywhere you go is a problem. If I could, I would have left this country and been somewhere else by now. But I have no way to do that."

Her daughter, Katya, was among the thousands killed in Gonaives and the surrounding Artibonite area by the floods of 2004's Tropical Storm Jeanne. The family moved to Port-au-Prince, where the earthquake killed her 26-year-old son and her half-sister, who provided for them by importing clothes and perfume from Miami for resale in Haiti.

What's left of the family is back in Gonaives, which is overlooked by mountains denuded by over-farming and rampant tree cutting for firewood that have cleared a path for destructive floods.

"I'm scared, but I'm living by the will of God," said Alceus, dressed in white after attending Sunday services at an evangelical church.

At least 55 sizable aftershocks have followed the magnitude-7.0 quake of Jan. 12, adding to the fear of survivors.

More than 150,000 quake victims have been buried by the government, an official said Sunday, but she said that doesn't count the bodies still in wrecked buildings, buried or burned by relatives or dead in outlying quake areas.

"Nobody knows how many bodies are buried in the rubble," said Communications Minister Marie-Laurence Jocelyn Lassegue said. Asked about the total number of victims, she said, "200,000? 300,000? Who knows the overall death toll?"

Lassegue told The Associated Press that the government's figure of 150,000 buried from just the capital area was based on figures from CNE, a state company that is collecting corpses and burying them north of Port-au-Prince.

An estimate of 200,000 dead was reported last week by the European Commission, citing Haitian government sources. As of Monday, the United Nations was reporting at least 112,250 confirmed deaths, based on recovered bodies.

The final toll will clearly place the Haiti earthquake among the deadliest natural catastrophes of recent times. That list includes the 1970 Bangladesh cyclone, believed to have killed 300,000 people; the 1974 northeast China earthquake, which killed at least 242,000 people, and the 2004 Indian Ocean tsunami, with 226,000 dead.

Attending to the living, meanwhile, an army of international aid workers was getting more food into people's hands, but still falling short.

Food aid has reached 500,000 people at least once, the U.N. reported Sunday, but as many as 2 million people are in need.

"We wish we could do more, quicker," said Josette Sheeran, the U.N. World Food Program chief who was visiting Port-au-Prince.

Much of the aid flows though the capital's strained airport, not far from a makeshift camp in a public park where Leger Lunes has been living with his wife and year-old daughter under a triangular shelter of blankets propped on sticks.

Lunes, 39, said none of the aid has reached his family, which has survived by selling cookies along the roadside, getting enough money to buy a little rice.

He said he's willing to move into a more organized tent camp if the government asks.

Key officials from around the world met Monday in Montreal to discuss ways to coordinate relief efforts in Haiti. U.S. Secretary of State Hillary Clinton, Haitian Prime Minister Jean-Max Bellerive and foreign ministers from other nations were attending.

The world's nations have pledged some $1 billion in emergency aid to Haiti. Organizers of Friday night's "Hope for Haiti Now" international telethon reported the event raised $57 million, with more pledges from ordinary people still coming in.