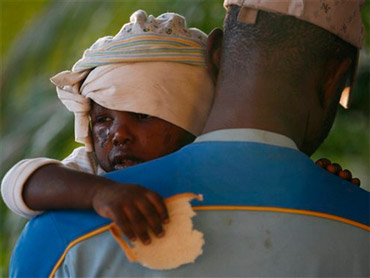 International aid is beginning to show up in Haiti, but much of Port-au-Prince remains a scene of chaos and despair as relief organizations complained of a "logistical nightmare."

"I have not seen any coordinated efforts in any rescue mission because the same bodies that I've seen in the streets the day after the incident took place, those same bodies are still [there]," Frederick Auzate, a Haitian-American from Silver Spring, Md., told CBS Evening News anchor Katie Couric in Port-au-Prince Thursday.

Couric reports that few police and emergency vehicles are visible in the Haitian capital, which she described as "a city in shambles and on edge."

According to a Reuters reporter, the number of bodies lying outside the hospital morgue could total more than 1,000.

And Haiti's Red Cross placed death toll estimates in the 45,000 to 50,000 range, with 3 million more hurt or homeless, according to Reuters.

In Port-au-Prince, Auzate said he worries what the coming days will bring.

"Literally I can say the whole population is homeless. … People grow more desperate and then God only know what's going to happen," he said.

Turning pickup trucks into ambulances and doors into stretchers, Haitians are frantically struggling to save those injured in Tuesday's earthquake while hoping foreign governments will quickly send in aid.

President Barack Obama said the U.S. has committed an initial $115 million relief effort for Haiti and has told top agency and department heads to put Haiti at the top of their agenda.

Mr. Obama added, however, that it will take hours, "maybe days" to get a full U.S. relief contingent on ground in Haiti.

U.S. Secretary of State Hillary Clinton said major damage to Haiti's main airport and ports had slowed down relief efforts. "Depending on where you are you may not see this coordinated effort," Clinton told CBS' "The Early Show" Thursday.

The airfield opened just after midnight, Major Jason Daniels of the Air Force told CBS News correspondent Kimberly Dozier. He said the airport has just one runway and is running at maximum capacity, so it's possible the military will look at other airfields in the area.

The limited capacity at the airport may explain a report from CNN that the FAA has suspended all flights into Port-au-Prince.

The first group of soldiers - a little over 100 - from the 82nd Airborne Division will leave later Thursday, the Army said. The troops will find locations to set up tents and other essentials in preparation for the arrival of another roughly 800 personnel from the division on Friday.

They come on top of some 2,200 Marines, also to be sent, as the military prepares to help with security needs, search and rescue and the delivery of humanitarian supplies. More than a half dozen U.S. military ships also are expected to help, with the largest, the aircraft carrier USS Carl Vinson, arriving Thursday.

Early Thursday an Air China plane carrying a Chinese search-and-rescue team, medics and aid landed at Port-au-Prince airport, and more than 50 people in orange jumpsuits got out accompanied by trained dogs.

And a British flight carrying a government assessment team and 71 rescue specialists along with heavy equipment arrived in the neighboring Dominican Republic. The crew prepared to head to Haiti.

The U.S. and other nations said they were sending food, water, medical supplies to assist the Western Hemisphere's poorest nation, where the international Red Cross estimated 3 million people - a third of the population - may need emergency relief.

The United Nations released $10 million from its emergency funds, even as U.N. forces in Haiti struggled with their own losses. The U.N. headquarters building collapsed, and at least 18 U.N. peacekeepers and four international police officers have been confirmed dead, with up to 150 still missing, including mission head Hedi Annabi of Tunisia and his chief deputy, Luis Carlos da Costa.

But a U.N. security guard was pulled out of the headquarter's wreckage alive, in what Secretary-General Ban Ki-moon called a "small miracle" amid so much death and devastation.

U.N. spokesman Martin Nesirky said the U.N. is still putting together a list of national and international civilian staff with the peacekeeping mission who have died.

"We'll be using whatever roads are passable to get aid to Port-au-Prince, and if possible we'll bring helicopters in," said Emilia Casella, a spokeswoman for the U.N. food agency in Geneva.

There was no official estimate on how many people were killed by Tuesday's magnitude-7 quake. Haitian president Rene Preval said the toll could be in the thousands. Leading Sen. Youri Latortue told The Associated Press the number could be 500,000, but conceded that nobody really knew.

"Let's say that it's too early to give a number," Preval said told CNN.

Couric described the scene in Port-au-Prince further: "There's a massive sort of makeshift homeless shelter that people have been building. There are kids living in buses, families living under tarps."

People slept outdoors last night, many of them too scared to go back into what's left of their homes as aftershocks can still be felt in the area, Couric reports.

Hospitals, schools and the main prison collapsed. The capital's Roman Catholic archbishop was killed when his office and the main cathedral fell. The head of the U.N. peacekeeping mission was missing in the ruins of the organization's multistory headquarters.

All three hospitals operated by Doctors Without Borders have collapsed or had to be abandoned from Haiti. Many of its doctors are missing.

Police officers turned their pickup trucks into ambulances to carry the injured. Wisnel Occilus, a 24-year-old student, was wedged between two other survivors in a truck bed headed to a police station. He was in an English class when the earth shook at 4:53 p.m. and the building collapsed.

Other survivors carried injured to hospitals in wheelbarrows and on stretchers fashioned from doors.

If there were any organized efforts to distribute food or water, they were not visible.

Bodies were everywhere in Port-au-Prince: those of tiny children adjacent to schools; women in the rubble-strewn streets with stunned expressions frozen on their faces; men hidden beneath plastic tarps and cotton sheets.

As dusk fell, thousands of people gathered on blankets outside the crumpled presidential palace, including hundreds of women who waved their hands and sang hymns in a joyful, even defiant tone.

Ricardo Dervil, 29, said he decided to join the crowd because he was worried about aftershocks and was tired of seeing dead bodies.

"I was listening to the radio and they were saying to stay away from buildings," he said. "All I was doing was walking the street and seeing dead people."

Balancing suitcases and belongings on their heads, people streamed on foot into the Haitian countryside, where wooden and cinderblock shacks showed little sign of damage. Ambulances and U.N. trucks raced in the opposite direction, toward Port-au-Prince.

Looting began immediately after the quake, with people seen carrying food from collapsed buildings. Many lugged what they could salvage and stacked it around them as they slept in streets and parks.

Port-au-Prince's ruined buildings fell on both the poor and the prominent: The body of Archbishop Joseph Serge Miot, 63, was found in the ruins of his office, according to the Rev. Pierre Le Beller at Miot's order, the Saint Jacques Missionary Center in Landivisiau, France.

The United Nations said 16 U.N. personnel were confirmed dead and between 100 and 150 U.N. workers were still missing, including U.N. mission head Hedi Annabi of Tunisia and his chief deputy, Luis Carlos da Costa.

Senate President Kelly Bastien was rescued from the collapsed Parliament building and taken to a hospital in the neighboring Dominican Republic. The president of Haiti's Citibank was also among the survivors being treated there, said Rafael Sanchez Espanol, director of the Homs Hospital in Santiago.

An American aid worker was trapped for about 10 hours under the rubble of her mission house before she was rescued by her husband, who told CBS's "Early Show" that he drove 100 miles to Port-au-Prince to find her. Frank Thorp said he dug for more than an hour to free his wife, Jillian, and a co-worker, from under about a foot of concrete.

The survivors likely will face an increased risk of dengue fever, malaria and measles - problems that plagued the impoverished country before, said Kimberley Shoaf, associate director of the UCLA Center for Public Health and Disasters.

The international Red Cross said a third of the country's 9 million people may need emergency aid, a burden that would test any nation and a crushing catastrophe for impoverished Haiti.

The U.S. State Department confirmed one death among the estimated 40,000 to 45,000 Americans who live in Haiti, but many were struggling to find a way out of the country.

The quake damaged the airport, stranding dozens there. Kency Germain of Eatontown, N.J., kept his family - five adults and three children - at the airport until nearly 3 a.m. They made their way to the U.S. Embassy, where they were allowed to sleep briefly near the entrance.

"It was safer in there (the airport) than it was out there in Port-au-Prince," Germain said.