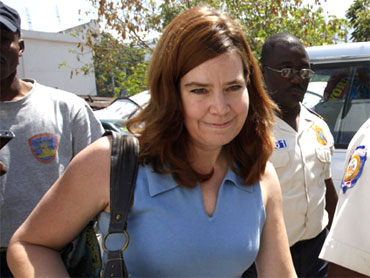 The last of 10 American missionaries detained in Haiti on suspicion of kidnapping is facing a new charge.

Judge Bernard Saint-Vil says Laura Silsby has been charged for a newly discovered, alleged attempt to bus child earthquake survivors to the Dominican Republic on Jan. 26.

She already could face trial on kidnapping and criminal-association charges from her group's attempt to take 33 children across the border without permission three days later.

Saint-Vil has added the new charge of "organization of irregular trips," from a 1980 law restricting travel out of Haiti that was signed by then-dictator Jean-Claude Duvalier.

The judge said Friday he has until early May to decide whether to release Silsby or order a trial.

More Coverage of the Baptists

One of Silsby's fellow missionaries .

Charisa Coulter was taken from her jail cell to the airport by U.S. Embassy staff more than a month after she and nine other Americans were arrested.

Coulter told CBS News at the airport in Haiti, just before boarding her flight home, that she had "learned a lot" through her experience, and she wouldn't soon forget the lessons.

She said it "feels wonderful" to be released and that she was looking forward to Silsby "getting out soon."

Defense attorney Louis Ricardo Chachoute said Coulter was released because there was no evidence to support the charges of kidnapping and criminal association. Before Friday's announcement of the new charge against Silsby, he predicted she would be released soon.

"There are no prosecution witnesses to substantiate anything," Chachoute said.