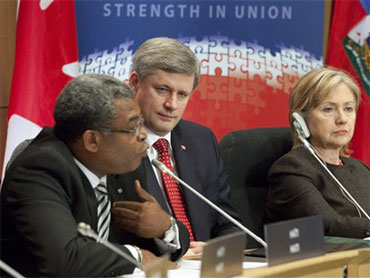 Haiti must lead the effort to rebuild after its devastating earthquake, the United States and other nations said as Haiti's prime minister acknowledged that relief efforts so far have fallen dramatically short.

"To date we have not been able to feed everybody, to give water to everybody," Prime Minister Jean-Max Bellerive said Monday at the end of a daylong conference intended to review and improve the delivery of short-term aid as well as chart a course for long-term recovery.

Haiti's magnitude-7 earthquake killed an estimated 200,000 people and left the poorest country in the Western Hemisphere virtually without a functioning government. It wrecked the presidential palace, parliament, government ministries and the U.N. headquarters, among thousands of other structures.

The conference did not result in any firm financial commitments, but Canadian Foreign Minister Lawrence Cannon said talks had produced "the beginnings of a roadmap" for helping get Haiti back on its feet, as well as a "shared vision" of the island nation's longer-term rebuilding.

"The government of Haiti must and will be in the lead," U.S. Secretary of State Hillary Rodham Clinton said. "We cannot any longer in the 21st century be making decisions for people and their futures without listening, and without giving them the opportunity to be as involved and make as many decisions as possible."

Bellerive said Haiti can lead the rebuilding effort after the Jan. 12 earthquake.

"Haitians continue to work in precarious conditions," Bellerive said in opening remarks, but Haiti's government "is in the position to assume the leadership expected of it by its people in order to relaunch the country on the path to reconstruction."

Complete Coverage: The Road to Recovery in Haiti
Haiti Quake: How You can Help

It's estimated that up to 300,000 people have fled Haiti's capital, Port-au-Prince, for the countryside and more are leaving every day - to get away from the widespread devastation and the squalor of the makeshift tent cities, CBS News correspondent Bill Whitaker reports.

For those who remain in the city, the issue is jobs. There is so much work to be done, but so far no organized reconstruction, no one is being hired and frustration is rising, Whitaker reports.

The participating countries agreed in a joint statement that "an initial 10-year commitment is essential."

Clinton also said the U.S. would host an international donors conference for Haitian relief in March at U.N. headquarters in New York.

Clinton told the concluding news conference that it would be unwise to organize a donors conference now, in the absence of a reliable assessment of Haiti's needs and a solid roadmap for how to coordinate and execute an international recovery plan.

"We are still in an emergency" with many Haitians suffering and desperate for immediate relief, she said, adding that the Montreal talks were a first step. "We're trying to do this in the correct order," she said.

Robert Fox, the executive director of Oxfam, a group that works with developing countries, agreed that the international community should not start investing in huge projects until there's a clearer picture of what's needed.

Clinton also said an effective recovery strategy for Haiti must take into account a sudden rush of thousands of quake survivors from Port-au-Prince into the countryside.

Clinton, speaking to reporters during a break in a daylong conference, said she was encouraged by Bellerive's analysis. He told the conference that the exodus from Port-au-Prince has added a new twist to the post-quake challenge.

"The distribution of people (and) their needs have changed," Bellerive said. "We have to reassess the whole country," in terms of job creation and requirements for housing.

Haiti's government wants many of the homeless to leave the capital city of 2 million people, to look for better shelter with relatives or others elsewhere. Officials estimate that about 235,000 have taken advantage of its offer of free transport to leave the city, and many others left on their own, some even walking.

Clinton also called on other countries to join Brazil, Argentina and other Latin American nations in contributing to the U.N.-led military and police force in Haiti.

She called Monday's conference "the beginning of a conversation" about Haiti's future that will continue for years.

On her flight to Montreal from Washington, Clinton told reporters traveling with her that the U.S., in collaboration with international donors and organizations, had been mapping out a plan for Haiti's development for months before the quake. She indicated this could be the basis for a revised plan now.

"I don't want to start from scratch, but we have to recognize the changed challenges that we are now confronting," she said.

Asked about a news report that Haiti would request $3 billion in aid during the Montreal conference, Bellerive said no specific request was made and that the Haitian government is still assessing its financial requirements.

"The government has no official number," he told reporters.

Attending the conference were foreign ministers from more than a dozen countries, plus representatives of eight international bodies, including the United Nations and the Organization of American States, and six major non-governmental organizations. At the conference in New York in March donations will be pledged for Haiti's recovery and rebuilding.