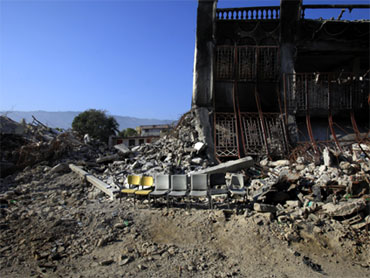 The U.N. and the U.S. State Department on Wednesday are running the largest global fundraiser to date, asking nations to pony-up almost $4 billion to rebuild Haiti in the wake of the devastating January earthquake.

The objective of the organizers is to garner commitments for $1.3 billion in the next year, half of which they want up front to meet immediate needs.

Haiti announced ahead of the conference that former President Bill Clinton would serve as co-chair of a new commission overseeing the huge aid effort, alongside the impoverished nation's Prime Minister, Jean-Max Bellerive.

Clinton's wife, U.S. Secretary of State Hillary Rodham Clinton will also be at the aid drive - as a reminder of the power couple who are hailed in Haiti for their devotion when Bill Clinton was president.

The idea is to put Haiti back on center stage. U.N. staff and workers from non-government organizations have complained that the campaign to raise $1.5 billion remains 50 percent short, and that initial public attention has waned.

"The appeal has stagnated," a spokeswoman for the U.N. Office for the Coordination of Humanitarian Affairs, Elisabeth Byrs, said in Geneva a day before the Donors Conference.

The new commission headed by Clinton and Bellerive is part of the plan for aid and rebuilding that Haitian officials are carrying to the conference at U.N. headquarters.

The Interim Haiti Recovery Commission (IHRC) will be tasked with coordinating the expected flood of aid from international donors, and then overseeing the distribution of that cash to projects, in line with the Haitian government's priorities.

European Union and U.S. officials are expected to pledge $2.8 billion each for agriculture, energy, health, security and justice - this time to be directed by Haiti, but with the U.N. and the World Bank to include monitoring mechanisms ensuring the money goes where it's needed.

Possibly the most dramatic element of Haiti's reconstruction plan is a proposal to completely redistribute the nation's meager economic engine, and its population.

According to an article in The New York Times, a team of Haitian urban planners has crafted a proposal to literally scatter the disaster-prone capital city's inhabitants to smaller urban "growth poles".

"The guidelines are still in a nascent stage," writes Times architectural reporter Nicolai Ouroussoff. "But the guidelines already surpass any of the early reconstruction plans for post-Hurricane Katrina New Orleans or for the parts of Asia affected by the tsunami in 2004. The guidelines' well-reasoned thinking about environmental threats and the history of urban development in Haiti suggests that they could become a reliable blueprint not just for reconstruction, but also for solving many of the urban ills that have plagued the country for decades."

At the U.N. conference, a board will also be formed to include each donor pledging $100 million over two years or $200 million in debt reduction - an incentive offered in hopes that the big donors list, which now includes the U.S., Canada, Brazil, France, Venezuela and the E.U., will expand.