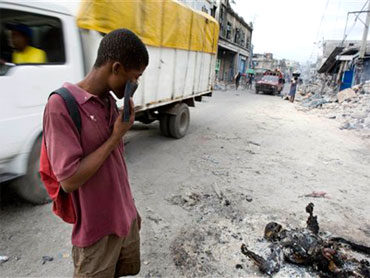 The smallest survivors of Haiti's catastrophic earthquake are growing into one of the biggest problems in its aftermath.

Many of the countless thousands of children scattered among Port-au-Prince's makeshift camps of homeless have nobody to care for them, aid workers say, leaving them without protection against disease, child predators and other risks.

"They are extremely vulnerable," said Kate Conradt, a spokeswoman for the aid group Save the Children.

She said U.N. experts estimate there may be 1 million unaccompanied or orphaned children or youngsters who lost at least one parent in the Jan. 12 quake.

Some young Haitians are even being released from hospitals with no one to care for them - there just aren't enough beds for them.

"Health workers are being advised to monitor and send separated/unaccompanied children to child-friendly spaces," the U.N. humanitarian office said in its latest situation report.

CBS News correspondent Seth Doane reports that 8-year-old Wilson Benoit has made the streets of Port-au-Prince his home. Both of his parents were kill in the earthquake.

"What goes through your mind when you think of them?" Doane asked the boy.

"I miss them a lot," Wilson said in Haitian Creole. "I used to cry all the time."

The U.N. children's agency, UNICEF, along with Save the Children and the Red Cross, has begun registering at-risk children and has identified three interim care centers at orphanages where they can be temporarily sheltered, said Bo Viktor Nylund, a senior UNICEF adviser for child protection.

The Connecticut-based Save the Children, meanwhile, has set up "Child Spaces" in 13 makeshift settlements. And the three agencies are working to reunite families, by creating a joint database of separated family members.

"This is just the beginning of the exercise," Nylund said. "Considering the number of people who died in the earthquake, we are expecting children in the thousands who have lost their parents."

The plight of the young is especially poignant even in a country where the U.N. estimates one-third of the 9 million people need international assistance.

The needs are evident in Port-au-Prince's streets, alleys and crumbled doorways, where handwritten messages beg for help. In the Juvenat neighborhood, a group of 50 families scrawled in green on a white sheet hung from a doorway: "We need food assistance, water and medicine."

It was evident Tuesday, too, among thousands of people pressing against the gates of a food-distribution site in the Cite Soleil slum, where Haitian police swung sticks to beat back the crowd.

Near the quake-devastated National Palace, Brazilian troops in the U.N. peacekeeping mission occasionally fired pepper spray or pointed their guns at people to control a tightly packed, jostling line of Haitians waiting for food.

Thomas Louis, 40, who was trying to get rice and oil for his two babies, said Haitians appreciated the foreign help, but he complained about the lack of organization. "This is anarchy. This is not aid. This is a way to put people down."

The monumental scale of the Haiti disaster - perhaps 200,000 dead, a capital city on its knees - has severely strained the world's ability to get relief supplies through Port-au-Prince's overloaded airport and crippled seaport.

Some 800 to 1,000 aid flights were still awaiting permission to land, a seven-day backlog, U.N. and European officials said Tuesday. John Holmes, U.N. humanitarian coordinator, estimated 2 million people need food, but only 500,000 have received some so far.

The medical picture has improved, but remains critical. World Health Organization spokesman Paul Garwood said more medical staff were needed, especially rehabilitation specialists, to help with postoperative recovery of 200,000 people who have had amputations or other surgery.

Haitian and volunteer staff from dozens of countries work around the clock. In some hospitals, they are still performing up to 100 amputations a day.

At Port-au-Prince's General Hospital, Haitian-born pediatrician Winston Price, a volunteer from New York, was caring for some 80 children in four tents on the hospital grounds. A handful had been brought in with no clues to their families. Price could only wonder.

"Maybe some of these parents are not even looking because their house was destroyed and they might think the kid was inside," he said. "But maybe the kid was pulled out, so they are missing each other."

Children left alone are everywhere. At one of the 13 Save the Children sites, about 25 children have no adult relatives taking care of them, Conradt said. She said the group has helped some 6,000 children since the quake.

The aid group's "Child Spaces" are cordoned-off areas where children can play under supervision, "run around being children, giving them a chance to return to normalcy as much as they can," she said.

Such areas also protect children against the potential for abduction by child traffickers, a chronic problem in pre-quake Haiti, where thousands were handed over to other families into lives of domestic servitude, said Deb Barry, an emergency protection adviser with Save the Children.

She said her organization is working to track down every rumor it hears about threats to stranded children, "but we haven't been able to verify those thus far."

In Geneva, a UNICEF spokeswoman, Veronique Taveau, said the organization had been told of children disappearing from hospitals. "It's difficult to establish the reality," she said, but added that UNICEF has strengthened security at hospitals and orphanages.

Government spokeswoman Marie Laurence Jocelyn-Lassegue, the communications minister, said Tuesday that Haitian officials have temporarily halted new adoptions because of concerns about corruption and carelessness in the system.

"Some children we don't know if the parents are alive or not," Jocelyn-Lassegue said.
MMX, CBS Interactive Inc.. All Rights Reserved. This material may not be published, broadcast, rewritten, or redistributed. The Associated Press contributed to this report