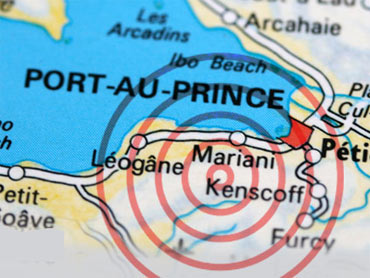 (Daniel Morel)
"Unimaginable" is how Haitian President Rene Preval described the devastation in his nation after a 7.0-magnitude earthquake rocked the Caribbean nation Tuesday.

In his first interview since the earthquake, Preval told the Miami Herald his country was destroyed and that the death toll would be in the thousands, though he shied away from providing a more concrete estimate.

"We have to do an evaluation," Préval said.

The president said he traveled through several neighborhoods, surveying the damage. "All of the hospitals are packed with people. It is a catastrophe," Preval said.

Preval's wife, agreed. "I'm stepping over dead bodies. A lot of people are buried under buildings. The general hospital has collapsed. We need support. We need help. We need engineers."

France's foreign minister said the head of the U.N. peacekeeping mission also was apparently among the dead. And a Roman Catholic priest in France said Monsignor Joseph Serge Miot, the archbishop of Port-au-Prince, died in the earthquake.

Father Pierre Le Beller of the Saint Jacques Missionary Center in western France says fellow missionaries in Haiti told him they found Miot's body in the ruins of the archdiocese office.

International Red Cross spokesman Paul Conneally said a third of Haiti's 9 million people may need emergency aid and that it would take a day or two for a clear picture of the damage to emerge. The United Nations said the capital's main airport was "fully operational" and that relief flights would begin Wednesday.