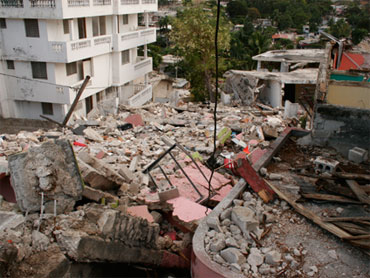 Nearly three months after a massive earthquake struck Haiti, about 1.3 million people in the country are living outdoors, but not all of them are doing so by necessity.

Some quake survivors prefer living outside of the places they called home ever since the 7.0-magnitude earthquake struck the country Jan. 12 because they're worried their undamaged houses won't stand up to the next temblor to hit the country.

One such Haitian told The Miami Herald she sleeps outside her undamaged house on a mat, fearful she'll die under the rubble of her house in the future.

"Two years from now, if the earthquake hasn't killed me, you will find me right here in front of my house," 39-year-old Kettely Achedou told the newspaper, adding that she stands under an awning when it rains at night.

Achedou isn't alone. Her entire block exemplifies the fear many Haitians feel toward their houses as neighbors sleep on mattresses in the street and in tents even though they're surrounded by undamaged buildings.

Experts told the newspaper 300,000 to 400,000 of the earthquake's survivors can return to undamaged houses, yet they're too afraid to believe their buildings are safe.

U.S.-trained engineers have evaluated the safety of 10,000 homes in the country, marking safe ones with green.

"More than 40 percent of them are safe but empty,'' U.S. military engineer Col. Roberto Cintron, the man who supervises U.S. military engineers and contractors in the country, told the newspaper. "The other day I met a lady with three small children whose family was sleeping in two tents, and her house was perfectly fine. I told her, 'What if I come and I spend the night here? Would you go inside then?' She said: 'The day you sleep here, the earthquake would not happen. It would happen the next day.'"