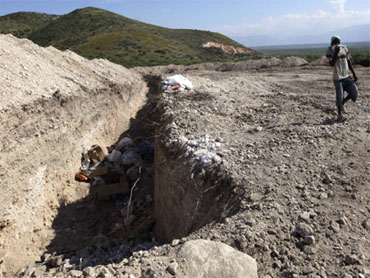 Workers are carving out mass graves on a hillside north of Haiti's capital, using earth-movers to bury 10,000 earthquake victims in a single day while relief workers warn the death toll could increase.

"The next health risk could include outbreaks of diarrhea, respiratory tract infections and other diseases among hundreds of thousands of Haitians living in overcrowded camps with poor or nonexistent sanitation," said Dr. Greg Elder, deputy operations manager for Doctors Without Borders in Haiti.

The death toll is estimated at 200,000, according to Haitian government figures relayed by the European Commission, with 80,000 buried in mass graves. The commission now estimates 2 million homeless, up from 1.5 million, and says 250,000 are in need of urgent aid.

Getting help in is still a challenge. Gen. Douglas Fraser, head of the U.S. Southern Command running Haiti's airports said Thursday that 1,400 flights are on a waiting list for slots at the Port-au-Prince airport that can handle 120 to 140 flights a day.

Getting help in is still a challenge. Gen. Douglas Fraser, head of the U.S. Southern Command running Haiti's airports said Thursday that 1,400 flights are on a waiting list for slots at the Port-au-Prince airport that can handle 120 to 140 flights a day.

It followed a magnitude-5.9 temblor a day earlier that collapsed some structures.

In the sparsely populated wasteland of Titanyen, north of Port-au-Prince, burial workers on Wednesday said the macabre task of handling the never-ending flow of bodies was traumatizing.

"I have seen so many children, so many children. I cannot sleep at night and, if I do, it is a constant nightmare," said Foultone Fequiert, 38, his face covered with a T-shirt against the overwhelming stench.

The dead stick out at all angles from the mass graves - tall mounds of chalky dirt, the limbs of men, women and children frozen together in death. "I received 10,000 bodies yesterday alone," said Fequiert.

Workers say they have no time to give the dead proper religious burials or follow pleas from the international community that bodies be buried in shallow graves from which loved ones might eventually retrieve them.

"We just dump them in, and fill it up," said Luckner Clerzier, 39, who was helping guide trucks to another grave site farther up the road.

An Associated Press reporter counted 15 burial mounds at Clerzier's site, each covering a wide trench cut into the ground some 25 feet deep, and rising 15 feet into the air. At the larger mass grave, where Fequiert toiled, three earth-moving machines cut long trenches into the earth, readying them for more cadavers.

Others struggle to stem the flow of the dead.

More than eight days after the magnitude-7.0 earthquake, rescuers searched late into the night for survivors with dogs and sonar equipment. A Los Angeles County rescue team sent three dogs separately into the rubble on a street corner in Petionville, a suburb overlooking Port-au-Prince. Each dog picked up the scent of life at one spot.

They tested the spot and screamed into the rubble in Creole they've learned: "If you hear me, bang three times."

They heard no response, but vowed to continue.

"It's like trying to find a needle in a haystack, and each day the needles are disappearing," team member Steven Chin said.

But against all odds, the occasional survivor was still pulled from the wreckage Wednesday. The International Medical Corps said it was caring for a child found in ruins Wednesday. The boy's uncle told doctors and a nurse with the Los Angeles-based organization that relatives pulled the 5-year-old from the wreckage of his home after searching for a week, said Margaret Aguirre, an IMC spokeswoman in Haiti.

A Dutch mercy flight carrying 106 children slated for adoption arrived in the Netherlands from Port-au-Prince on Thursday. Nearly all of the children, aged 6 months to 7 years, were in the process of being adopted and already had been matched to new Dutch parents before the quake.

At the Mission Baptiste hospital south of Port-au-Prince, patients waited on benches or rolling beds while doctors and nurses raced among them, X-rays in hand.

U.N. peacekeepers and U.S. troops have been helping keep order around aid deliveries and clinics in the stricken city, which seemed relatively calm on Thursday, even if looters continued to pillage pockets of downtown.

Police stood by as people made off with food and mobile phones from shattered shops, saying they were trying to save stores that are still undamaged.

"It is not easy but we try to protect what we can," said officer Belimaire Laneau.

Young men with machetes fought over packages of baby diapers within sight of the body of a young woman who had been shot in the head. Witnesses said police had shot her, but officers in the vicinity denied it.

Elder, of Doctors Without Borders, said that patients were dying of sepsis from untreated wounds and that some of the group's posts had 10- to 12-day backups of patients.

The U.S. Navy said it is working to add 350 more crew members to the hospital ship, quadrupling the number of beds aboard to 1,000 and increasing the number of operating rooms from six to 11.

Commanders of the floating hospital also are sending medical teams ashore to help with casualty evaluation and triage.

At United Nations headquarters in New York, U.N. humanitarian chief John Holmes said it was believed 3 million people are affected. Vast, makeshift camps and settlements have sprung up for survivors.

CBS "Early Show" co-anchor Harry Smith spent a day seeing how some of Haiti's homeless are making the best of a dire situation in one tent village on the outskirts of Port-au-Prince. The 50,000 inhabitants' sense of hope and their relentless effort to keep on living life left Smith in awe.

Joseph St. Juste and his 5-year-old daughter, Jessica, were among 50,000 people spending their nights at a golf course. He is afraid to stay in his home because of the aftershocks.

The survivors have put of shelters of bedsheets or cardboard boxes on fairways that snake up the hill toward a country club where U.S. paratroopers give out food daily.

St. Juste, a 36-year-old bus driver, wakes up every day and goes out to find food and water for his daughter.

"I wake up for her," he said. "Life is hard anymore. I've got to get out of Haiti. There is no life in Haiti."