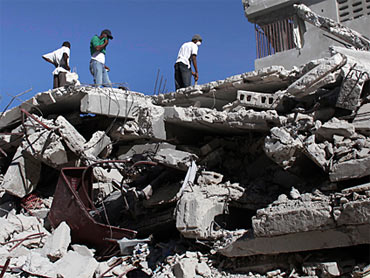 The numbers behind the outpouring of earthquake assistance are giant. But they are dwarfed by the statistics indicating the scope of the disaster in Haiti, the number of victims and their deep poverty.

"The level of need is going to be significantly higher" than many previous disasters, said Dr. Michael VanRooyen, director of the Harvard Humanitarian Initiative.

Here are some numbers, with the proviso that figures are estimates that are constantly changing.

A senior Haitian official said Friday that the death toll from the earthquake , the Reuters news agency reported.

Bodies collected for disposal so far: 9,000. An additional 7,000 corpses were reportedly placed in a mass grave.

• Percent of buildings damaged or destroyed: Up to 50 percent.

• Patients treated by Doctors Without Borders initially: more than 1,500.

Kate Conradt, chief spokeswoman for Save the Children, said that the challenge ahead cannot be overcome in a few days or weeks. "This is a long-term disaster," she said in a telephone interview from Port-au-Prince.

Helping Haiti "is going to take far more than we ever could imagine," VanRooyen said.

So in response, the world has opened its wallets.

• Total pledge of aid by governments around world: $400 million.

• Number of governments that have sent aid so far: more than 20.

• Amount of money raised by Save The Children: $7 million.

• Amount of money raised by the Salvation Army and some other charities: more than $3 million.

Help That's Already There or Coming

• Number of people a day WFP hopes to feed within 15 days: 1 million.

• Number of people a day WFP hopes to feed within one month: 2 million.

• Amount of food salvaged by WFP in damaged Haitian warehouse being distributed: 6,000 tons (out of a total of 15,000 tons stored before the earthquake).

• Meals prepared and freeze dried by the Salvation Army in Kansas and Iowa to ship to Haiti: 1.28 million, weighing nearly 200,000 pounds.

• Number of trucks carrying bottled water being trucked in from neighboring Dominican Republic: 13.

"We are seeing overwhelming need within the city and increasingly desperate conditions," Conradt said. "We visited two camps today with 5,000 people and only four latrines total. We were told that the number of people there doubles at night, but during the day they are looking out for food, water and family members."

And this is a country that before Tuesday's earthquake was the poorest in the Western Hemisphere and one of the poorest worldwide. More than half of Haiti's 9 million people live on less than $1 a day, even before the earthquake, according to the United Nation's World Food Program. The World Bank said the average Haitian lives on just $1,180 a year.

Nearly half of Haiti's population is hungry and only half had access to safe drinking water before the earthquake, according to the World Food Program. Nearly 60 percent of Haiti's children under 5 are anemic.

• Number of Americans evacuated from Haiti: 846.

• Number of United Nations worker in Haiti when earthquake struck: 12,000.