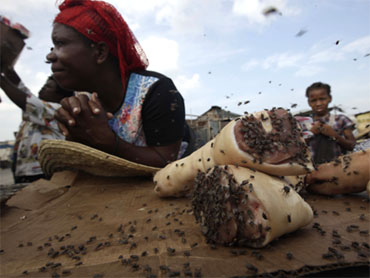 Day eight for me here was less hairy than yesterday's trip through the city. We headed out looking for food distribution points, but not even an American in a World Food Organization truck could tell me where to find one.

Just past the airport heading west was an unusual sight: a blue tank truck, dispensing water out of two pipes in the rear. You'd think that hundreds of people would be lining up but there were perhaps a dozen at a time, bringing empty bottles or simply cupping their hands and drinking that way. Several men and women put their heads under the pipe, dousing themselves with probably their first showers in days.

Above: Flies swarm pigs' feet sitting for sale at an outdoor market in the Cite Soleil neighborhood of Port-au-Prince, Wednesday, Jan. 20, 2010. International aid flowing into Haiti after last week's earthquake has been struggling with logistical problems, and many people are still desperate for food and water.

We then went to Citie Soleil, generally considered the poorest part of town – and one of the most dangerous. Today it looked like the richest. Dozens of people set up shop, selling everything from produce and big bags of rice to oil and clothing. The place was packed with sellers – and seemingly, buyers, although a lot of people were looking for handouts(and finding none). My guide and interpreter, Ricardo, tells me many of the people there were selling "hot" goods – stuff they stole during the post-earthquake looting. Commerce is alive and well in Port-au-Prince.

Next stop, Port Jeremie. I was there a couple of days ago, and it was packed with people trying to board ferries and other boats trying to get away. Maybe three or four thousand people there. Today, empty. No fuel for the boats, says Ricardo. Nobody's going anywhere.

Finally, we visited a tent city and some neighborhoods. Everywhere, the same story: no food, no drink, sick children and no help in sight. One woman told me that a truck came by to hand out rice, but people fought hard for it and in the end, the strongest won, while the weaker people – mostly children and women – were left wanting. One man told me he'd been surviving on a diet of crackers. Others said they've had no food for three days. One man pointed to the sky, hoping for help from a greater power.

There is still no good distribution system for food, water or anything else. I'm absolutely floored by this. We're told that supplies are arriving daily. We see and hear the huge cargo planes landing, but we have no idea who's running the show, nor where all of these supplies are actually going. I may be going out on a limb here, but from what I've seen, this operation makes Brownie's FEMA response to Katrina look like a crowning achievement in emergency response. That's how bad it is.

People here ask me for help. The best I can do, I tell them, is to tell their stories, and hope that the people who hear them are touched and respond.