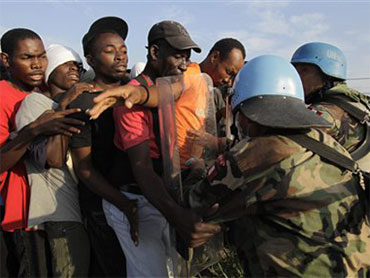 The most powerful aftershock yet struck Haiti on Wednesday, shaking more rubble from damaged buildings and sending screaming people running into the streets eight days after the country's capital was devastated by an apocalyptic quake.

The aftershock was initially measured at 6.1 magnitude but later revised to 5.9, according to the U.S. Geological Survey. It was the largest of more than 40 significant aftershocks that have followed the Jan. 12 quake. The extent of additional damage or injuries was not immediately clear.

Wails of terror rose from frightened survivors as the earth shuddered at 6:03 a.m. U.S. soldiers and tent city refugees alike raced for open ground, and clouds of dust rose in the capital.

Complete Coverage: Devastation in Haiti
How to Help Victims
(Watch below children being saved, night in Port-au-Prince)

The USGS said Wednesday's quake was centered about 35 miles west-southwest of Port-au-Prince and 6.2 miles below the surface - a little further from the capital than last week's epicenter was.

"It kind of felt like standing on a board on top of a ball," said U.S. Army Staff Sgt. Steven Payne. The 27-year-old from Jolo, West Virginia was preparing to hand out food to refugees in a tent camp of 25,000 quake victims when the aftershock hit.

The strong aftershock prompted Anold Fleurigene, 28, to grab his wife and three children and head to the city bus station. His house was destroyed in the first quake and his sister and brother killed.

"I've seen the situation here, and I want to get out," he said.

A massive international aid effort has been struggling with logistical problems, and many Haitians are still desperate for food and water.

Still, search-and-rescue teams have emerged from the ruins with some improbable success stories - including the rescue of 69-year-old ardent Roman Catholic who said she prayed constantly during her week under the rubble.

Ena Zizi had been at a church meeting at the residence of Haiti's Roman Catholic archbishop when the Jan. 12 quake struck, trapping her in debris. On Tuesday, she was rescued by a Mexican disaster team.

Zizi said after the quake, she spoke back and forth with a vicar who also was trapped. But he fell silent after a few days, and she spent the rest of the time praying and waiting.

Doctors who examined Zizi on Tuesday said she was dehydrated and had a dislocated hip and a broken leg.

Elsewhere in the capital, two women were pulled from a destroyed university building. And near midnight Tuesday, a smiling and singing 26-year-old Lozama Hotteline was carried to safety from a collapsed store in the Petionville neighborhood by the French aid group Rescuers Without Borders.

Also, a 69-year-old ardent Roman Catholic who said she prayed constantly during her week under the rubble and two children were saved by a New York rescue team.

Experts have said that without water, buried quake victims were unlikely to survive beyond three days.

(CBS/AP)
(At left, a map of where Wednesday's earthquake was felt.)

Crews at the cathedral recovered the body of the archbishop, Monsignor Joseph Serge Miot, who was killed in the Jan. 12 quake.

Authorities said close to 100 people had been pulled from wrecked buildings by international search-and-rescue teams. Efforts continued, with dozens of teams hunting through Port-au-Prince's crumbled homes and buildings for signs of life.

But the good news was overshadowed by the frustrating fact that the world still can't get enough food and water to the hungry and thirsty.

"We need so much. Food, clothes, we need everything. I don't know whose responsibility it is, but they need to give us something soon," said Sophia Eltime, a 29-year-old mother of two who has been living under a bedsheet with seven members of her extended family.

The World Food Program said more than 250,000 ready-to-eat food rations had been distributed in Haiti by Tuesday, reaching only a fraction of the 3 million people thought to be in desperate need.

CBS News "Early Show" co-anchor Harry Smith recently visited one camp where some survivors have gathered. Smith marveled at the sprit of the people faced with constant devastation in the quake's aftermath.

The WFP said it needs to deliver 100 million ready-to-eat rations in the next 30 days, but it only had 16 million meals in the pipeline.

Even as U.S. troops landed in Seahawk helicopters Tuesday on the manicured lawn of the ruined National Palace, the colossal efforts to help Haiti were proving inadequate because of the scale of the disaster. Expectations exceeded what money, will and military might have been able to achieve.

So far, international relief efforts have been unorganized, disjointed and insufficient to satisfy the great need. Doctors Without Borders says a plane carrying urgently needed surgical equipment and drugs has been turned away five times, even though the agency received advance authorization to land.

A statement from Partners in Health, co-founded by the deputy U.N. envoy to Haiti, Dr. Paul Farmer, said the group's medical director estimated 20,000 people are dying each day who could be saved by surgery.

"TENS OF THOUSANDS OF EARTHQUAKE VICTIMS NEED EMERGENCY SURGICAL CARE NOW!!!!!" the group said in the statement. It did not describe the basis for that estimate.

The reasons are varied:

• Both national and international authorities suffered great losses in the quake, taking out many of the leaders best suited to organize a response.

• Woefully inadequate infrastructure and a near-complete failure in telephone and Internet communications have complicated efforts to reach millions of people forced from their homes.

• Fears of looting and violence have kept aid groups and governments from moving as quickly as they would like.

• Pre-existing poverty and malnutrition put some at risk even before the quake hit.

Governments have pledged nearly $1 billion in aid, and thousands of tons of food and medical supplies have been shipped. But much remains trapped in warehouses, or diverted to the neighboring Dominican Republic. Port-au-Prince's nonfunctioning seaport and many impassable roads complicate efforts to get aid to the people.

Aid is being turned back from the single-runway airport, where the U.S. military has been criticized by some of poorly prioritizing flights. The U.S. Air Force said it had raised the facility's daily capacity from 30 flights before the quake to 180 on Tuesday.

About 2,200 U.S. Marines established a beachhead west of Port-au-Prince on Tuesday to help speed aid delivery, in addition to 9,000 Army soldiers already on the ground. Lt. Cmdr. Walter Matthews, a U.S. military spokesman, said helicopters were ferrying aid from the airport into Port-au-Prince and the nearby town of Jacmel as fast as they could.

U.S. Defense Secretary Robert Gates said the military will send a port-clearing ship with cranes aboard to Port-au-Prince to remove debris that is preventing many larger aid ships from docking.

The U.N. was sending in reinforcements as well: The Security Council voted Tuesday to add 2,000 peacekeepers to the 7,000 already in Haiti, and 1,500 more police to the 2,100-strong international force.

"The floodgates for aid are starting to open," Matthews said at the airport. "In the first few days, you're limited by manpower, but we're starting to bring people in."

Hanging over the entire effort was an overwhelming fear among relief officials that Haitians' desperation would boil over into violence.

"We've very concerned about the level of security we need around our people when we're doing distributions," said Graham Tardif, who heads disaster-relief efforts for the charity World Vision. The U.N., the U.S. government and other organizations have echoed such fears.

Occasionally, those fears have been borne out. Looters rampaged through part of downtown Port-au-Prince on Tuesday, just four blocks from where U.S. troops landed at the presidential palace. Hundreds of looters fought over bolts of cloth and other goods with broken bottles and clubs.

USGS geophysicist Bruce Pressgrave said nobody knows if a still-stronger aftershock is possible.

"Aftershocks sometimes die out very quickly," he said. "In other cases they can go on for weeks, or if we're really unlucky it could go on for months" as the earth adjusts to the new stresses caused by the initial quake.

(Watch: Boy, Girl Rescued after a Week in Rubble)