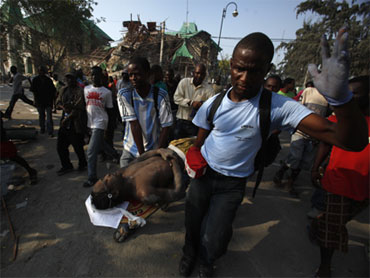 The cameras are gone; Haiti is off the front pages. Now two months later, it's possible for those who experienced the magnitude 7.0 earthquake through the media to think of the devastation and the humanitarian crisis that followed in the past tense. Chile and health care and unemployment demand our attention. For the people of Haiti, however, the crisis continues — a constant, inescapable, overwhelming reality.

I was in Haiti for a month, arriving one week after the quake. The first week I spent in shock. I had lived through the Northridge quake that rocked Los Angeles in 1984. That was horrible. But nothing prepared me for the horror I encountered in Port-au-Prince.

Block after block after block was leveled. So many people in that impoverished Caribbean country had little to begin with. The earthquake left hundreds of thousands with nothing but their faith and their spirit.

I saw that faith and spirit in abundance. My CBS News crew and I met a middle-class woman, Madame Yolene Bartroni, whose house was the only one in her poor neighborhood still standing — cracked and unlivable, but standing. She opened the gates of her property to neighbors. More than 100 children, women and men joined Madame Bartroni and her family sleeping under makeshift tents in the yard.

Two weeks after the quake, no aid agencies had made it to her part of Port-au-Prince. So, with her salary as a hotel receptionist (she was one of the lucky Haitians still to have a job), she bought water and food and medicine and diapers. When she ran out of money, she tapped her family in the U.S., which used social networks to gather donations. Grateful neighbors say were it not for Madame Bartroni they'd be homeless and hungry in the streets. Holding back tears, Madame Bartroni told us they struggle to live day to day.

We saw that kind of giving every single day. People who had little sharing with those who had nothing.

It would have been understandable if Haitians had cursed their fate, but we witnessed just the opposite. Haitians are people of deep faith.

Watch CBS News Videos Online
They marked the one month anniversary of the quake with prayer services all over the city. You could barely drive a block without seeing worshipers spilling out of the churches that were still standing or a congregation gathered where churches once stood.

(At left, watch Bill Whitaker's report of Haitians marking its first month after the earthquake)

Hymns filled the air. Hundreds of thousands of people gathered on the boulevards that surrounded the collapsed presidential palace, an ornate white structure that now resembles a melted wedding cake — hundreds of thousands solemnly praying for those who had died and joyously thankful for having survived.

When the minister called for five minutes of silence, the only sounds heard were quiet, heart-wrenching sobs here and there in the crowd. It was a powerful moment.

With the rainy season approaching and one million homeless people living in squalid tent cities, Haitians need all the faith and spirit they can muster. Proud and resilient as they are, they cannot get back up on their feet by themselves. They desperately need the helping hand the world extended immediately after the quake. Haitians wish they had the luxury of referring to this tragedy in the past tense. They need the world to remember it is their present and their future.