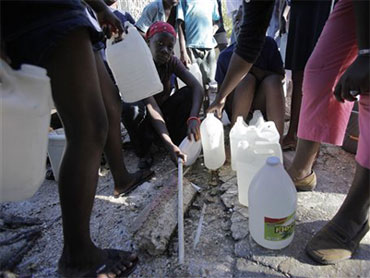 How difficult will it be for the United States and other donors to track the millions of dollars in earthquake aid headed to Haiti? U.S. government auditors pulled out of the country years ago after concerns over kidnappings and other crimes scuttled their efforts to monitor Haiti's spending of $45 million in U.S. aid after storms there killed thousands.

Corruption, theft, violence and other security problems and Haiti's sheer shortage of fundamentals — reliable roads, telephone and power lines and a sound financial system — will add to the challenges of making sure aid is spent properly as foreign governments and charities try not only to help Haiti recover from this week's devastating earthquake but to pull itself out of abject poverty.

Experts believe that donations are on course to be the biggest ever, topping Katrina and the 2004 Tsunami, reports CBS News correspondent Randall Pinkston.

The United Nations reports governments, so far, have pledged $323 million. Corporations at least $139 million and the pledges are still coming in - with more than 30 companies donating $1 million each.

Past efforts haven't been easy. The Government Accountability Office, the investigative arm of Congress, faced problems on a smaller scale in 2005 and 2006 as auditors tried to review the use of roughly $45 million in aid the U.S. provided after Tropical Storm Jeanne struck Haiti in September 2004, killing more than 2,000 people, injuring more than 2,600 and affecting an estimated 300,000 others.

The inspectors wanted to visit projects funded with the money to measure progress. But after an initial fact-finding trip to Haiti, it was considered too dangerous for them to go back. They could visit only projects deemed safe as destinations. In summer 2005, many employees of the Agency for International Development — which is coordinating the current U.S. response to the earthquake — were temporarily pulled out of Haiti, according to government reports.

Haiti is one of the poorest places on Earth. Most basic public services are lacking, people typically live on less than $2 a day, nearly half the population is illiterate and the government has a history of instability. The public has little opportunity to be sure that aid to the government is used honestly and well. Nor is following the money easy for donors, including the United States, 700 miles away and one of the country's biggest helpers.

"It has been a challenge, and I think it really is one of the things we have to look at when the country has had such long-standing problems that it seems as though we have made little dent there," said Rep. Russ Carnahan, a Democrat and chairman of the House Foreign Affairs Committee's subcommittee on international organizations, human rights and oversight.

The immediate focus is search and rescue and addressing immediate public health needs. But after that, "I think there's going to be a number of questions that arise," Carnahan said.

Just last month, a private group, the Heritage Foundation for Haiti, urged Haiti's government to complete an audit of a $197 million emergency disaster program to respond to corruption allegations over how the money was handled. Haiti's senate cited the allegations when it removed Prime Minister Michele Pierre-Louis in November and replaced her with Jean-Max Bellerive.

President Barack Obama promised at least $100 million in earthquake aid. That comes on top of substantial spending by the United States in Haiti in recent years for economic development such as the country's textile industry, humanitarian assistance, environmental programs, and law enforcement, including trying to stop the use of Haiti as a pass-through point for narcotics en route to the United States.

Apart from earthquake relief, senators working on the next annual foreign assistance budget have proposed at least $282 million for Haiti; the House proposal would provide at least $165 million.

Much of the U.S. government's aid to Haiti comes through the Agency for International Development, which has provided at least $800 million from budget years 2004 through 2008, agency figures show.

At least $700 million more was pledged to Haiti by governments, international givers and charities at an April 2009 donors conference. Former President Bill Clinton, a United Nations special envoy to the country, told the U.N. Security Council in September that he was "100 percent committed to delivering tangible results to the U.N. and most importantly the people of Haiti."

The Haitian government relies on foreign aid to keep itself and its economy operating.

In a December 2008 Gallup survey, 60 percent of Haitians interviewed said there had been times that year when they did not have enough money to buy food, and 51 percent said there were times when they could not afford shelter.

Statistics about Haiti, as gathered by the U.S. government, chronicle a grim standard of living. According to the CIA and State Department, 1 in 8 children in Haiti dies before age 5. The life expectancy is 59 to 62 years. Malaria, typhoid and dengue fevers and other life-threatening illnesses long ago wiped out in the industrialized world still plague Haiti.