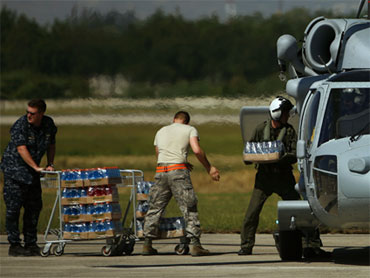 (AP Photo/Ricardo Arduengo)
The Doctors Without Borders group says its plane loaded with medical gear has been turned away from the Port-au-Prince airport three times since Sunday.

The Doctors Without Borders cargo plane carrying 12 tons of medical equipment, including drugs, surgical supplies and two dialysis machines, was turned away three times from Port-au-Prince airport since Sunday night despite repeated assurances of its ability to land there, the group said.

The 12-ton cargo was part of the contents of an earlier plane carrying a total of 40 tons of supplies that was blocked from landing on Sunday morning. Since January 14, Doctors Without Borders has had five planes diverted from the original destination of Port-au-Prince to the Dominican Republic. These planes carried a total of 85 tons of medical and relief supplies.

"Each aircraft is given a time slot to land and two hours to park, unload, taxi and take off," said Capt. John Kirby, spokesman for Joint Taskforce. He noted that if an aircraft takes longer than two hours on the deck to get off, it backs up the system.

The decision (to divert aircraft) is made by the Haitian government and the air traffic controllers they have, Capt. Kirby said. Incoming flights are prioritized based on fuel load for the aircraft in terms of when they can land, he added.

"There is an even split between the flow of military and civilian flights. We try hard to balance that out. Some non-essential military flights have been diverted," Capt. Kirby said.

On Tuesday, the prioritization for flights coming in to the Port Au Prince Airport was this, as per USAID:

More than 700 Doctors Without Borders staff are working to provide emergency medical care to earthquake survivors in and around Port-au-Prince. Doctors Without Borders teams are currently working in Choscal Hospital, Martissant Health Center, Trinite Hospital, Carrefour hospital, Jacmel Hospital, and are establishing a 100-bed inflatable hospital in the Delmas area. They are running exploratory assessment missions to other locations outside the capital as well.