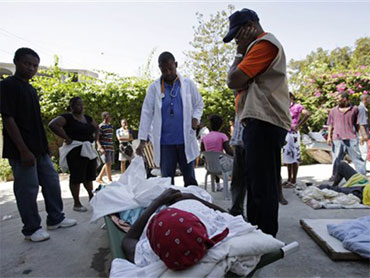 For years, Claude Surena has treated the sick at his two-story hillside home near the center of the Haitian capital.

A magnitude-7.0 earthquake has brought the 59-year-old pediatrician's involvement to a whole new level.

Surena has converted his property into a field hospital for more than 100 quake victims. His patients are treated in the shaded, leafy patio of his undamaged home while thousands of others in the city lie in the dirt under a merciless sun waiting for attention from a handful of doctors.

"I have to thank whoever brought me," said Steve Julien, who says the last thing he remembers before he blacked out was rescue workers calling his name as they dug through the rubble of his house.

When he woke up, he was lying on a mattress inside Surena's soothing oasis.

It wasn't long after Tuesday's earthquake leveled nearly all of the houses next to Surena's that neighbors started showing up at his doorstep.

"It was a blessing from God my house is safe," he said. "We at least have been able to do something for everyone."

Surena has been relying on food and supplies salvaged from ruined homes to treat patients' broken bones and, for the dying, provide at least a minimum level of comfort away from the devastation.

The patients show physical and emotional wounds from having their homes collapse on them. Julien, 48, is among the least severely injured, with only a few scrapes and a sore body. Others have compound fractures and festering wounds. Surena said at least 10 patients are in critical need of more substantial help.

The injured sing Christian hymns as they huddle close together beneath sheets strung up as tents, but the earthquake still haunts them. Aftershocks rattled the city as recently as Friday morning.

"Sometimes they just start crying. We still get some movement," said Surena, who is also the local district chairman for Haiti's disaster relief agency.

How to Help Victims
"Family Links" Web site for the Missing
Complete Coverage: Devastation in Haiti

The conditions at his home are far from ideal. Plastic buckets serve as toilets, and for some patients Surena can do little more than change dressings on infected wounds. But they are better off then many in Port-au-Prince, the capital city of 3 million people.

Surena earned his medical degree in Haiti and spent a year at the University of Illinois training in neonatology. He has been tending his ward with the help of two other doctors, including a Lake Worth, Florida-based gynecologist, Frantz Python, who was working in the area when the earthquake struck.

Eighteen of their patients have died. No case hit Surena harder than a pregnant woman who died shortly after she started having contractions Tuesday night, likely from internal hemorrhaging. Despite a rudimentary Cesarean-section, they could not save the baby.

"She was really suffering," Surena said. "The most difficult thing emotionally is that you know how to do it, but you don't have the materials do it."

The patients say they know Surena is doing his best.

Florene Francois, 19, was trying to soothe her fussing 18-month-old son, Rick Joey, on blankets in a corner of the patio between Surena's grill and a built-in bar. She said she is fine despite the scrapes on her face, but she worries about a deep gash on the back of her son's head.

"They just don't have what they need for the stitches," she said.

A 39-year-old tailor, Roger Hubert, had bandages on wounds and a sling for a severely broken arm. His bones have not been reset because there is no X-ray machine available.

"Considering the materials here, they are taking good care of us," Hubert said.

The supplies of food, water and medicine were quickly running out. Surena drove himself to the airport Thursday after neighbors cleared away debris blocking the only road down the hill, but his hopes of finding help were dashed in the confusion of so many arriving aid flights.

"So many planes. You don't know where to go and who to talk to," he said.

Still, he is optimistic more help is coming. He said Rotary International has pledged to send supplies including shelter boxes for the patients, and he expects more doctors to come, too.

Meanwhile, he keeps everyone at his house because they have nowhere else to go. He sent three patients in urgent need of surgery to a hospital on the airport road Thursday, but he took them back in after they were refused admission.

"They would have left their bodies on the street," Surena said.