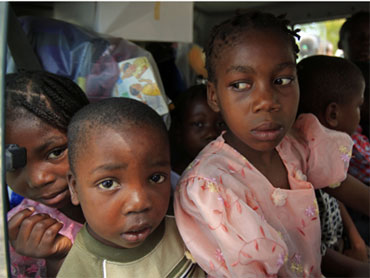 Joyful parents on Wednesday recovered the children that they gave to American missionaries about six weeks ago.

The 33 children had been living at the SOS Orphanage on Port-au-Prince's outskirts since police stopped a group of 10 U.S. Baptist missionaries from taking them across the Dominican border on Jan. 29 following Haiti's devastating earthquake.

Orphanage officials said all but one of the children were given back to 22 families. A remaining child, whose age and gender were not given, is awaiting further verification of her parents' identities.

The children had been underfed and some were incontinent from stress, the orphanage said. On Wednesday they were dressed in their Sunday best to return home with parents who had given them away to foreigners a month and a half before.

Many will go back to living under bed sheets or in tin shacks because their parents homes were destroyed by the quake. Some children and orphanage workers cried as they left. The parents, who have had some contact with the children in recent weeks, wore broad smiles.

Each family was given about $260 along with food and blankets. The orphanage has also been providing counseling to the children, who they fear will feel rejected, and to parents about the dangers of child trafficking, said spokeswoman Line Wolf Nielsen.

Regilus Chesnel said he had to negotiate with Haitian, U.N. and orphanage officials before he was allowed to reunite with his children - ages 12, 7, 3, and 1 - and a 10-year-old nephew.

"I am thrilled. I feel like God has come back to me," the 39-year-old stone mason said.

Chesnel said previously he had given his children to Haitian pastor Jean Sainvil, who was working with the U.S. missionaries, because Sainvil told him that dead bodies buried under rubble in his El Citron neighborhood would breed disease.

Nine of the 10 Baptist missionaries involved in the case have been released from jail and left Haiti. Group leader Laura Silsby remains in custody at the police station that is being used as Haiti's temporary government headquarters.

Judge Bernard Saint-Vil said all could still be called to trial, and last week levied a new charge against Silsby based on allegations she had tried to take a different group of children to the border days earlier.

He heard new testimony Wednesday from the police commissioner who arrested the group at the border crossing.

Florence Avrilier, 32, recovered an 8-year-old boy she had given away. She said she kept her 12-year-old daughter because the missionaries told her they only wanted children younger than 10.

"I'm very happy. I had no hope I would ever get my son back again. This has been a very heartbreaking time for me," she said, putting her arm around the boy.