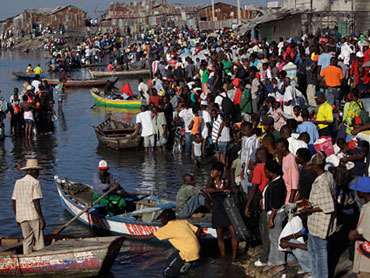 Haitians are so eager for information about a federal designation that will let illegal immigrants work temporarily in the U.S., they bombarded a Catholic church here even though the program doesn't start until Thursday.

More than 1,000 Haitians lined up this week outside the Notre Dame d'Haiti Catholic Church in Miami's Little Haiti neighborhood to ask questions about how to apply for temporary protected status. Some were told to come back the following day. Others have showed up at immigration law offices and community centers elsewhere in Florida as well as New York and New Jersey.

Citizenship and Immigration Services Director Alejandro Mayorkas said only those in the U.S. before the earthquake hit would will be eligible, and he warned that early applications would be delayed.

"I want a driver's license," said Fritznel Monneus, 34, who left a hurricane-ravaged Haiti in November 2008. "I want TPS. I want an ID. I want to be working right now."

Randy McGrorty, head of Catholic Charities Legal Services, fielded questions at the Miami church, mostly in Creole. He told some that family members wouldn't be able come from Haiti and seek the status, and that applicants likely wouldn't qualify for college financial aid. Generally, government benefits aren't available for those with the temporary status.

Some also asked whether they could get help paying the filing fees up to $470, including employment authorization. McGrorty said a fee waiver was available, though he discouraged it because it could delay an application.

Although the government has cautioned the protection is temporary 18 months some of those applying hoped it would lead to a longer reprieve. Immigrants from Central American countries have had the designation for more than a decade after a hurricane.

Applicants must prove their Haitian citizenship as well as their residence in the U.S. before the earthquake struck Jan. 12. Advocates urged people to collect rent receipts, utility bills, employment records and medical records to show they lived here.

Haitian President Rene Preval asked twice in 2008 for the U.S. to grant the temporary status, including after four consecutive hurricanes and tropical storms devastated a country already reeling from previous storm damage, food riots and spiking fuel prices. Those requests were denied.

U.S. officials have said they expect about 100,000 to 200,000 applications. However, Haitian community advocates in Miami believe the number of applicants will be closer to 30,000.

Allan Pierre, 29, of Miami, came to ask questions for friends who are here illegally and were afraid of being deported if they showed up.

"A lot of them were scared to come because they don't know what's going on, but I have a green card, so they cant do nothing to me," Pierre said.

Like many Haitians in the U.S., Pierre and his friends lost relatives in the earthquake. "They don't have a home no more in Haiti," Pierre said. "If they're able to be here, even temporarily, but legally, that's a big help."

About 350,000 people from five Central American and African countries are considered eligible for TPS, though not all may have it.

The agency's Web site has information in English, French and Creole. Also, the agency's call center, reachable at 1-800-375-5283, is open later than usual. Staffers who speak Creole are available to help.