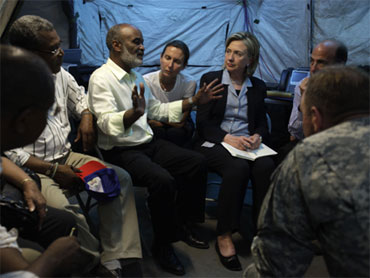 With the National Palace uninhabitable and his own home destroyed, Haitian President Rene Preval is trying to run his country from a dilapidated police station near the heavily damaged national airport.

The U.S. military controls his airport. International aid workers fret about a lack of government control. The Haitian police force is severely overworked.

"This is an extremely difficult situation," he told The Associated Press after one meeting. "We must keep our cool to coordinate and not throw accusations at each other."

Haiti is the poorest nation in the Western Hemisphere, with a history of corruption, political infighting and negligent administrations, resulting in decades of poor-to-mediocre services for ordinary citizens, half of whom live on less than $1 a day.

The country slowly had been regaining its footing in the last couple of years, thanks largely to the presence of 9,000 U.N. peacekeepers sent to help restore order following the violent rebellion in 2004 that ousted President Jean-Bertrand Aristide. New businesses were opening and former President Bill Clinton, now the U.N. special envoy for Haiti, had been working to attract foreign investment.

The earthquake has turned back the clock. For days, quake survivors and aid workers have complained about a lack of police. Law-and-order needs have fallen completely to the 9,000 U.N. peacekeepers and international police in Haiti - themselves coping with tremendous loss.

Meanwhile, the ousted Aristide, said he wants to return from his exile in Africa to help, though no concrete plans for that were apparent.

Against that backdrop, Hillary Rodham Clinton was careful to say the U.S. government would not be taking power from Haitian officials. "We are working to back them up, but not to supplant them," she told reporters accompanying her on her flight to the Caribbean nation.

Asked about her plans for meeting with Preval, she said she wanted to "listen to him, to be sure we are as responsive as we need to be."

Acknowledging the government's insistence that its "highest priority is to save lives," Clinton said it also would be helpful if the Haitian parliament would issue an emergency decree it was expected to debate Saturday.

U.S. Ambassador to Haiti Kenneth Merten said U.S. officials are in regular contact with Haitian officials about what their needs are and about distributing aid. Communications continue to be a problem for everyone, however.

"We can't even communicate amongst ourselves at the Embassy," he said.
By Associated Press Writer Alfred de Montesquiou