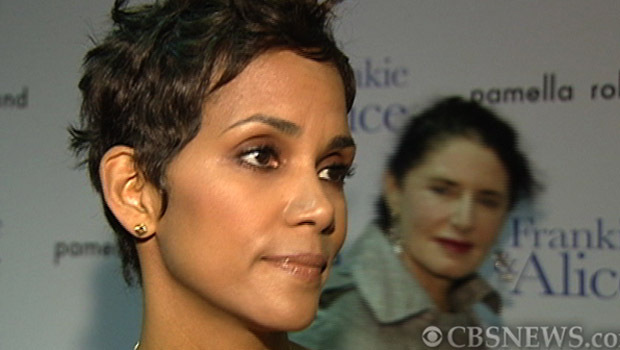 NEW YORK (CBS) After a three-year-long hiatus, Oscar-winning actress Halle Berry is back on the silver screen with "Frankie And Alice." A passion project of hers, Berry told us that the film took10 years to get made.

"An actor friend of mine told me about a man who had the rights to this woman's...this is inspired by a true story. And it's been my passion to get it done ever since...10 years ago," Berry revealed during a screening in New York .

Berry portrays Alice, a stripper in the 1970s who struggles with multiple personality disorder. Berry acts out each one of her very different personalities, including a white Southern racist , throughout the course of the film.. It's a  challenge for most actors, but  Berry didn't have to look too far to find inspiration. The Academy Award-winner had the chance to meet the real-life Alice during production.

"She's an amazing woman," Berry told us, "And what I love about her is that she was never victimized. She rose above this illness and is now living a very good life. She's a teacher. She was married. Has children. So, it's a triumph. And that makes me feel good."

And Berry now hopes that "Frankie and Alice" will inspire, and enlighten, movie-goers, "Hopefully if they see this movie, it might shed a little light on such a dark place. These people are really struggling. And it is an illness. And unfortunately this disorder is not something that can be cured. It's something that they have to learn to live with and learn how to integrate all of their personalities, so I hope it will make people have compassion and feel empathy towards people with mental illness."

So far, critics are offering praise for Berry's performance. After notorious duds such as "Catwoman," "Frankie And Alice" (which is now playing in theaters nationwide) may just serve up the performance(s) Berry needs.