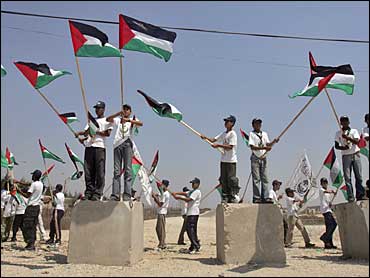 This column was written by Jonathan Schanzer.

The Hamas terror organization that gained power through a violent coup in the Gaza Strip in June is now signaling that it will maintain its rule through a combination of violence, authoritarianism, and Islamism. Witness the Talibanization of Gaza.

Forced Conversions. According to Fatah officials, Professor Sana al-Sayegh, a teacher at Palestine University in Gaza City, was kidnapped two weeks ago by Hamas and forced to convert to Islam against her will. Hamas Chief Ismail Haniyeh turned down repeated meeting requests from family members and leaders of the dwindling Christian minority in Gaza City. Meanwhile, Ala Aklouk, a senior Muslim cleric in Gaza City asked by Hamas to look into the case, said the professor converted to Islam of her free will. "She was too afraid to inform her family that she had converted to Islam," he said. Other Christians now fear for their lives, and are making plans to flee.

Muzzling the Media. Palestinian journalist Khaled Abu Toameh of the Jerusalem Post reported last week that Hamas' Executive Force (EF) prevented the distribution of three Fatah newspapers, including the al-Ayyam and al-Hayat al-Jadida dailies, in the Gaza Strip. Hamas even took some of the newspapers' circulation officials into custody for a short time. This is the first time that West Bank newspapers were ever barred from the Gaza Strip. According to the al-Jazeera website, Hamas attacked two cameramen from the Abu Dhabi satellite television channel, and stormed the Gaza bureau of Al-Arabiya satellite channel. Moreover, the EF has closed a pro-Fatah television station and radio station. In fact, Hamas now controls all electronic media in Gaza, except one radio station linked to the Palestinian Islamic Jihad (PIJ), another Iran-backed terrorist organization.

Beating Demonstrators. The al-Jazeera website also reports that the Hamas EF beat Fatah demonstrators on Monday when protestors chanted, "What is happening in Gaza is not acceptable," and "What has happened to security and human rights?" According to the al-Jazeera correspondent in Gaza, "Cameramen recording the protest were not allowed to film or get out of their cars." Hamas has now banned unlicensed demonstrations in Gaza by the Fatah party.

Disintegration of Law. The armed wing of Hamas, the Izz al-Din al-Qassam Brigades, reportedly seized legal documents from a lawyer that documented the confiscation of a car by Hamas. The militiamen took the lawyer's affidavit at gunpoint. Human and legal rights groups have documented the crime, but since Hamas is now the law in Gaza, they have no way to escalate the matter. Similarly, when the EF recently stormed the Palestinian General Federation of Trade Unions headquarters, raised the green Hamas flag over the building, and "nationalized" it, the Federation could do nothing. Rule of law continues to deteriorate.

Killing Political Rivals. Hamas has attacked its rivals with utter brutality. During the Hamas assault on Gaza in July, according to a Palestinian human-rights group, some 160 Palestinians were killed, including 45 civilians, and 800 were wounded. Fatah accounted for most of the casualties in grisly violence that included summary executions, kneecapping, and throwing handcuffed prisoners from tall buildings. More recently, one PIJ member was killed and six were wounded Wednesday in a battle between Hamas and PIJ in the Gaza Strip. Hamas moved against PIJ after gunmen fired their weapons in the air during a wedding celebration. Claiming a need to enforce a ban on firing weapons in public, Hamas fired a rocket at a PIJ stronghold, and gunfire could be heard for hours.

Islamizing the Police. Tellingly, the Hamas Executive Force that has been beating demonstrators and banning free press held a teach-in two weeks ago on being a Muslim policeman. How Islam will play a role in policing Gaza is not yet known, but the very notion of religious police smacks of the Taliban's Department for the Promotion of Virtue and Prevention of Vice, which punished Afghanis for straying from sharia law.

Al Qaeda Links? In 2006, Hamas Interior Minister Said Sayyam stated that he would not order the arrests of operatives who carried out attacks against Israel. This was tantamount to an invitation for al Qaeda and other jihadi groups to join Hamas in its war against Israel. Embattled Palestinian Authority President Mahmoud Abbas has since stated that al Qaeda maintains a presence in the West Bank and Gaza.

The Gaza Strip has never been idyllic. But, under Hamas, as one New York Times reporter notes, "Gaza looks like Somalia: broken and ravenous." Hamas conquered Gaza by force. It will need to maintain its grip on power by force. This is the beginning of the Talibanization of Gaza, and the end of hope for the rule of law.

By Jonathan Schanzer
Reprinted with permission from National Review Online