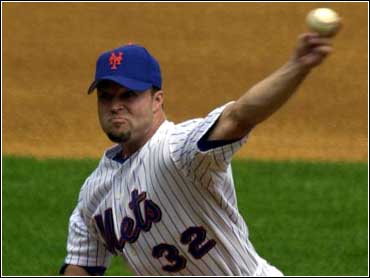 The New York Mets were happy to see that Mike Hampton was OK. They were glad, too, they did not see Steve Finley make the same play last season.

Hampton showed no ill effects from the cracked rib that sidelined him, pitching eight sharp innings as the Mets, despite being robbed by Finley's spectacular catch, beat Arizona 2-1 Sunday.

"It's not 100 percent, I could tell that. But I could handle it," Hampton said. "I felt comfortable for the most part."

New York increased its wild card lead over the Diamondbacks to 5 1/2 games, scoring the tiebreaking run in the seventh on Todd Zeile's RBI grounder.

The Diamondbacks lost for the fifth time in six games. They finished 2-7 against New York this season. The teams combined for only seven hits.

While Hampton (13-7) tamed Arizona on three hits in his first game since Aug. 17, Finley turned in the play of the day and one of the best this season on a ball hit by Ventura.

"You just shake your head and go back to the dugout," Ventura said.

With the score 1-all, Ventura opened the fifth with a high drive to deep center field. Finley, who had already taken away an extra-base hit from Mike Piazza with a leaping catch at the wall, raced back to the eight-foot-high fence and got ready.

Finley grabbed the top of the padding with his left hand, pulled himself up and reached far over the wall to backhand Ventura's shot. Mets fans cheered the play, and half of Finley's teammates on the field waited for him in front of the dugout to offer congratulations after the inning ended.

The Mets, menwhile, were fortunate Finley known for such sensational plays did not make that kind of catch last fall. Todd Pratt homered barely beyond Finley's reach in the same spot in the bottom of the 10th to lift New York over Arizona in the clinching Game 4 of the division series.

"It's the kind you love to make as an outfielder, but I'd replace both of those today for that one last October," Finley said. "In fact, I'd trade both of them for a win."

"It's not a play you can practice all the time," he said. "I think you practice it more in your mind."

Ventura knew Finley might cheat him of a home run.

"With him, if you don't go way over, you have a chance to be out," Ventura said. "You have to hit it way beyond his reach."

Said Mets manager Bobby Valentine: "It was deja-vu all over again. I thought Pratt's ball was caught and I thought this was over."

Sitting in the dugout, Pratt flashed back to last year.

"Mine was more of a line drive, Robin's was up in the air more," he said. "I'm definitely glad he couldn't pull mine back."

The Mets were equally happy to see that Hampton was OK. He was forced to leave his last start because of a stress fracture in a right rib aggravating an old high school football injury and a strained muscle in his side.

Hampton was in complete control against Arizona, allowing only three singles. He struck out three and walked two, and improved to 4-0 with a 2.18 ERA in his last six starts.

"He was aces," Valentine said. "I don't know if we're out of the woods yet. It's a situation we'll monitor and live with."

Armando Benitez pitched a hitless ninth for his 35th save.

The Mets scored the go-ahead run in the seventh after loading the bases with one out on singles by Edgardo Alfonzo and Piazza and a walk to Ventura. Zeile followed with a grounder in the hole and shortstop Hanley Frias did all he could to just get a forceout at second.

Arizona made it 1-all in the fifth when Kelly Stinnett drew a leadoff walk and eventually scored on Bautista's two-out single. Hampton limited the damage, picking off Bautista.