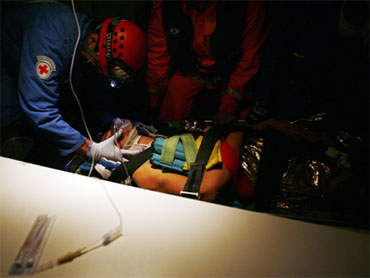 Rescuers pulled a dehydrated but otherwise uninjured woman from the ruins of a luxury hotel in the Haitian capital early Sunday, an event greeted with applause from onlookers witnessing rare good news in a city otherwise filled with corpses, rubble and desperation.

"It's a little miracle," the woman's husband, Reinhard Riedl, said after hearing she was alive in the wreckage. "She's one tough cookie. She is indestructible."

For many, though, the five days since the magnitude-7.0 quake hit have turned into an aching wait for the food, water and medical care slowly making its way from an overwhelmed airport rife with political squabbles. And while aid is reaching the country, growing impatience among the suffering has spawned some violence.

Nobody knows how many died in Tuesday's quake. Haiti's government alone has already recovered 20,000 bodies - not counting those recovered by independent agencies or relatives themselves, Prime Minister Jean-Max Bellerive told The Associated Press.

A U.N. humanitarian spokeswoman declared the quake the worst disaster the international organization has ever faced, since so much government and U.N. capacity in the country was demolished. In that way, Elisabeth Byrs said in Geneva, it's worse than the cataclysmic Asian tsunami of 2004.