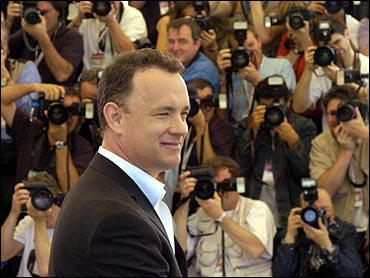 Tom Hanks made a slip of the tongue during his Cannes Film Festival appearance Tuesday to promote the Coen brothers' "The Ladykillers."

Hanks said he admired the Coens' unpredictability and skewed sensibility.

"But they also are uncomprehensible - uh, uncompromising," he said, correcting himself.

Then he quipped: "Sometimes, let's face it... I've got some questions about 'Barton Fink,' and (the Coens) can't even answer them."

"The Ladykillers," in which Hanks plays a verbose gentleman-criminal, is a loose remake of a 1955 movie by the same name that starred Alec Guiness and Peter Sellers.

In the original, a gang of crooks planning a job tries to kill the elderly landlady of the London flat where they are camped out. The re-make moves the action to the American South, with a little old lady landlord again being the fly in the soup for a bunch of would-be casino robbers led by a professor played by Hanks.

The remake, directed by Ethan and Joel Coen, is competing for the top prize at Cannes - the Palme d'Or (Golden Palm) - and Hanks' appearance was one of the most-awaited events at the festival on the French Riviera.

One Chinese journalist got a little carried away by her excitement.

At the news conference, she unfurled a huge poster from Hanks' early days in comedy and asked for an autograph. The poster was for 1989's "Turner & Hooch," a comedy in which Hanks played a cop who teams up with a large, slobbering dog.

It wasn't a hit with the critics and didn't win any big prizes. But like many forgettable early works of actors who later hit it big, the movie continues to pop up on TV from time to time.

"I have no recollection of that film," the two-time Academy Award winner joked. The reporter helped him along, asking, "Was it a comedy?"

He responded: "I think that's still being debated in cinemas throughout the world."