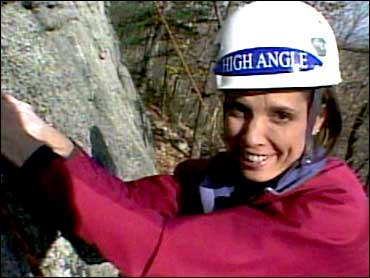 As part of a new The Early Show series called Facing Our Fears, Co-anchor Hannah Storm on Tuesday tells the story of how she attempted to conquer her fear of heights.

Storm says she's amazed by what adventure seekers will do for a thrill, like bungee jumping or cliff diving.

"For as long as I can remember I've been afraid of heights," she says. While it hasn't been debilitating, it has been limiting - there's a lot of things Storm wouldn't do.

Her fear is called acrophobia, and more than 19 million Americans suffer from it.

So she went to the "Gunks," a popular climbing destination in New Paltz, N.Y., determined to climb a very tall cliff.

"I do think it's important to face your fears and I thought it would be a big challenge. Not just physically but more of a mental challenge," she says.

video
from Tuesday's The Early Show to see what happened.