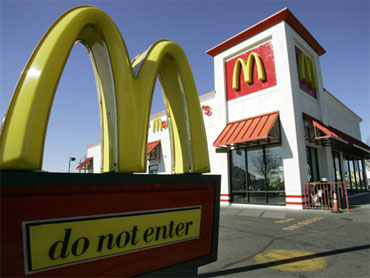 A Silicon Valley lawmaker's proposal to ban the decades-old practice of adding toys to fast food meals for kids would make McDonald's Happy Meals - and its counterparts at competing eateries - a thing of the past.

Unless, of course, if parents drive their children to a McDonald's in a neighboring northern California county.

The measure faces a vote in the Santa Clara County Board of Supervisors Tuesday, which aims to prevent restaurants from adding toys to meals with more than 485 calories, more than 600 milligrams of salt or high sugar or fat levels, the Los Angeles Times reports.

Bad Habits Can Age You by 12 Years, Study Shows

County Supervisor Ken Yeager, who is the board's president, proposed the measure. The toys add to childhood obesity because they encourage children to eat food that's bad for them, he said.

"What we need to understand is that these fast-food restaurants are spending hundreds of millions of dollars - they know exactly what they're doing by using these toys, cartoon toys, toys that are associated with movies - to try to entice the children to come in and have the meal," Yeager told CBS News Station KPIX-TV in San Francisco when he proposed the measure March 23.

"They'll still take their kids to the drive-thru and fast food because it's easy and it's fast," Dini said.

"People ask why I want to take toys out of the hands of children," Yeager told the Times. "But we now know that 70 percent of the kids that are overweight or obese will be overweight or obese as adults. Why would we want to burden anybody with a lifetime of chronic illness?"

McDonald's wouldn't comment on Yeager's proposal. The California Restaurant Association opposes the ban and said their toys shouldn't carry the full weight of responsibility for the country's problem with childhood obesity.

If Yeager "wants to take away the toys that are making kids fat, take away Xboxes, take away PlayStations, take away flat-screen TVs," association spokesman Daniel Conway told the newspaper.

McDonald's started selling Happy Meals in the 1970s, and the Times reported a reaction from Bob Bernstein, the Kansas City, Mo., advertising executive who helped create them. He told the newspaper the meals were only supposed to give something to the kids.

"To make a child happy and to not cost Mom any additional money - that was the original idea," Bernstein told the Times. "The toy was not the reigning reason for the child to order the Happy Meal."