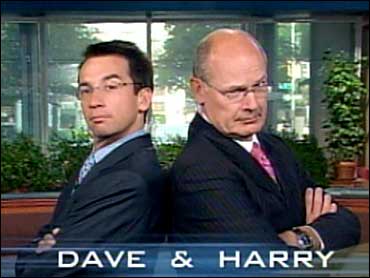 Tonight on CBS: The premiere of "The Amazing Race." Two of the show's biggest fans are The Early Show co-anchor Harry Smith and weatherman Dave Price -- so much, in fact, that, this time out, the producers actually allowed them to run the first leg of the race. This week, they'll show you how they did. And, warns Dave, it's not always pretty.

"Now we should make it clear," says Harry, "we were racing against ourselves and not the other 11 teams. And, of course, we were never eligible for the million-dollar price. But it was still an experience (that was) nothing short of amazing."

Here is their chronicle:

Harry: "Tomorrow: the big start. And I found out that traveling with Dave was definitely not what I expected."

Harry was born with the right stuff: Dave had to buy it all.

Shopping at the Paragon Sporting Goods Store, Dave had a odd encounter with a salesperson:

Salesperson: "What will you be doing?"

Salesperson: "Do you know what the weather is going to be like?"

Because team members must called everything all the time, they're advised to pack light. In the airport, Dave came to an unhappy realization:

Harry: "Well, then, you'll have to schlep that, I'm nice and light." (Eying Dave's backpack) "Is your mother in there?"

Team Early Show reported to the start city and the hotel that was the pre-race headquarters. To avoid being recognized, Harry and Dave tried to keep a low profile, wearing glasses, false noses and mustaches.

Producer Evan Weinstein gave them a quick briefing on the rules, and it was time to see if they could bond as a team.

Dave: "I asked if I could do it with Cronkite."

Dave: "That would have been fine."

Like all contestants, Harry and Dave were searched for phones, maps, cash, credit cards -- anything that might give them a leg up.

Fully briefed and thoroughly searched, team Early Show was confined to a single room, a ritual known as "lockdown," on the eve of their own "Amazing Race."

You can watch the other teams compete tonight (Nov. 16) on a special two-hour premiere of "The Amazing Race" at 9 p.m./ 8 p.m. Central.