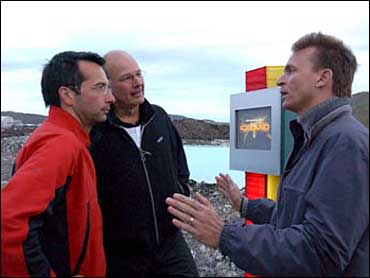 Every episode of "The Amazing Race" has an amazing finish, and the experience of The Early Show's Harry Smith and Dave Price was no different. They didn't win. Actually, they were never even in the running. But, they agree, just being there was a prize unto itself.

Previously on Harry and Dave's Amazing Race, The Early Show team drove Iceland's Highway One and made their way to the top of Vatnajokull Glacier. After changing into cold-weather gear, they boarded snowmobiles and powered their way to a secluded camp for the night. Then, after leaving the glacier the next morning, Harry and Dave hit the beach in search of a clue.

They pulled a detour, which offered them a choice of navigating a maze of glaciers to find a buoy with a new clue, or ice climbing.

After Harry declared, "I want to ice climb, because I've never done it," Dave agreed and they were off. While Harry and Dave made their way to the ice wall, the other teams were far ahead and nearly to the top. Without the proper equipment, glacial ice is nearly impossible to navigate. Harry and Dave got a quick lesson, then each had to face the mountain alone.

They exchanged an emotional farewell:

Harry: "I'll speak at your funeral."

As Harry strode away, Dave plaintively called after him: "What are you going to say? Can we work on that first?"

Ice climbing is definitely tougher than it looks. But there was no time for a break: it was time to race to the blue lagoon, in the shadow of the mountains. The last team to reach this pit stop would be eliminated.

With all the other teams closing in on the pit stop, Harry and Dave brought up the rear. After a wrong turn in the car park, they made a desperate sprint for the finish line.

In the end, it was host Keoghan's sad duty to inform Harry and Dave that they were the last team to arrive, and they were eliminated from the race. He also took the opportunity to chastise them for breaking a few rules: taking separate rooms at the Chicago hotel during "lockdown"; changing their clothes OUTSIDE the tent, and parking in the wrong place.

And no matter how much Harry and Dave begged, Keoghan was adamant: Their stint on "The Amazing Race" was definitely over.

Losing is never easy. Team Early Show took the news pretty hard. But, maybe, this was all nothing more than a practice run.