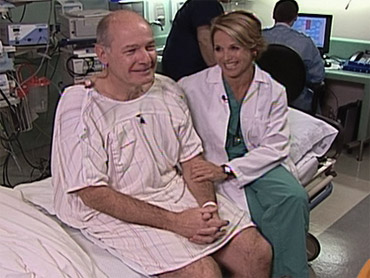 Colon cancer, according to the American Cancer Society, is the second-leading cause of death in the U.S. from cancer with more than 50,000 deaths each year.

With that in mind, "Early Show" co-anchor Harry Smith decided to have a colonoscopy live on the broadcast Wednesday to raise awareness of this deadly disease.

But before the live colonoscopy at hospital, Couric introduced him to the Monahan Center, which is named after her late husband Jay Monahan.

Smith noted that he couldn't have taken his on-air colonoscopy journey without the example set by Couric, who did the same thing on television in 2000 after her husband's death from colon cancer.

Monahan was diagnosed with colon cancer in 1997.

Couric told Smith about dealing with her husband's illness, saying, "We went from place to place. He had to have some radiology, and he had to actually get some treatment for his eyes. He had to get his chemo of course."

The couple struggled to find treatment options. At the age of 42, Jay lost his battle with colon cancer.

Couric said, "There's got to be a better way, a more compassionate, comprehensive way to treat people going through this hell, which it was."

Smith explained out of Couric's loss came a commitment to establish a center in her husband's honor to help families deal with prevention, screening, treatment and support.

Couric said, "As I have watched my daughters develop into really fine people, I always think Jay would be so proud of the people that they've become. And he's missed so much and that's really why I established this center. I don't want other dads or moms ... to miss their children's growing up."

Smith remarked that he experienced some of Couric's vision at his initial screening at the Jay Monahan Center for Gastrointestinal Health.

And Couric, who famously experienced a filmed colonoscopy in 2000, seems to have had an impact on viewers. Following her screening, researchers documented a 20 percent increase in the number of colonoscopies and dubbed it "The Couric Effect."

Couric stopped by the hospital to provide some moral support during Smith's initial screening -- and give him a bad time.

While he drank a laxative to help him prep for his screening, she joked, "Bottoms up, so to speak. I got a million of 'em Harry."

Couric added on "The Early Show" the prep laxatives are often the most challenging part of the screening. However, in comparison to a colon cancer diagnosis, she said it's a lot better.

"This is a very easy way to prevent it," she said.

Couric continued, "Nothing breaks my heart more than hearing from people who say they were diagnosed with colon cancer because I know they're saying to themselves, 'If only. If only I had gotten screened, then I wouldn't be in this situation.' And that's what we're really trying to educate people about today."