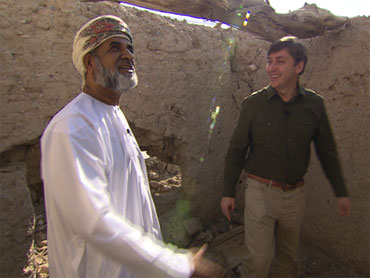 (CBS)
People always find it surprising that I'm able to find a story in everyone. And although there's definitely a secret to it, it has nothing to do with me.

The secret is that everyone really does have a story. In fact, most people have many stories.

Such was the case with the man we met in Oman. He had at least 3 or 4 stories I could have done.

From Mud Hut to Mansion

And, as a matter of full disclosure, I feel I should probably tell you about some of the ones I chose not to tell.

LIVING UNDER A MONARCH
Oman is ruled by a Sultan. This isn't a figurehead post like the queen of England, this is the real deal. If the Sultan wanted to change green to red, he could do it. Therefore, even though Oman is fairly liberal and accepting of others (certainly by Middle East standards), there had to be a story in what it's like to live under this form of government. I just chose not to tell it.

Photos: Everybody in the World Has a Story

A MAN'S PLACE
Oman, largely for religious reasons, is still a man's place – especially within the family. This is the first time I've ever been invited into a person's home for a considerable period of time and not even been introduced to the lady of the house. When I first asked my subject how many children he had, he answered, "I have five sons." I later found out he also has five daughters too. Surely, there must have been a story in that family dynamic. Yet again, I just chose not to tell it.

The fact of the matter is that, yes, if I really wanted, I could have drafted this whole series to highlight the differences between Americans and the rest of the world. I could have focused on what I perceived as injustices or inadequacies. However, isn't that what we do all the time in the news media? Isn't there enough polarizing already? In Oman, as in Latvia and India, I found lots of things I'd change and lots of things I thought we in America could learn from. I merely chose to focus on the latter.