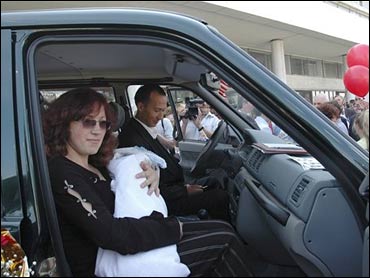 Don't be surprised if the streets are empty and curtains drawn in this central Russian region Wednesday as residents take up an offer by the regional governor to help stem Russia's demographic crisis.

Ulyanovsk Gov. Sergei Morozov has decreed Sept. 12 a Day of Conception and is giving couples time off from work to procreate. Couples who give birth nine months later on Russia's national day - June 12 - receive money, cars, refrigerators and other prizes.

It's the third year in a row that the Volga River region, about 550 miles east of Moscow, has held the contest. Since then, the number of competitors - and the number of babies born to them - has been on the rise.

Russia's population has dropped sharply since the 1991 Soviet collapse, fed by low life expectancy, declining birth rates, a spike in emigration to other countries, a frayed health care system and other factors.

The country - the world's largest - now has just 141.4 million citizens, making it one of the most sparsely settled nations in the world. Experts expect the decline to accelerate, estimating that Russia's population could fall below 100 million by 2050.

Just 311 women signed up to take part in the first competition, in 2005, and qualify for a half-day off from work. The following June, 46 more babies were born in Ulyanovsk's 25 hospitals compared to the previous June, including 28 born on June 12, officials said.

More than 500 women signed up for the second contest, in 2006 - resulting nine months later in 78 babies, or more than triple the region's daily average. So far this year, the region's birth rate is up 4.5 percent compared to the same period last year.

"I don't think people get pregnant just to get a prize on the 12th (of June) but if the dates coincide and they give you a ... car there's nothing wrong with that," said Yuri, a 28-year-old father-to-be who declined to his last name.

In his state of the nation address last year, President Vladimir Putin called the demographic crisis the country's most acute problem and announced a broad effort to boost the birthrate, including cash subsidies for couples giving birth to more than one child. Women who give birth to their second or third child receive 250,000-ruble vouchers (US$10,000, euro7,300) that can be used to pay for education or home repairs.

In Ulyanovsk, everyone who has a baby in a local hospital on June 12 gets some kind of prize. The winners of the grand prize - a locally made SUV called a UAZ-Patriot - are couples judged by a committee on criteria such as "respectability" and "commendable parenting."

Perhaps not surprisingly, the effort has drawn snickers. According to one joke circulating on the Internet, regional university teachers - after being ordered to draw up special activities for Wednesday - proposed covering the floors of school gymnasiums with mattresses and dimming the lights.

One blogger, writing under the name of "gezesh," proposed round-the-clock pornography to be broadcast on local TV channels, region-wide distribution of sex toys and Viagra and free by-the-hour hotel rooms for young couples.

Andrei Kartuzov, who won the last "make a baby" grand prize along with his wife, Irina, said they had been planning to have another child anyway when they heard about the contest.

The campaign "is a good help for people, especially for those living in villages," he said. "If they hold such actions every year, then maybe we will have (more children) growing up and Russia will be bigger."
By Masha Stromova