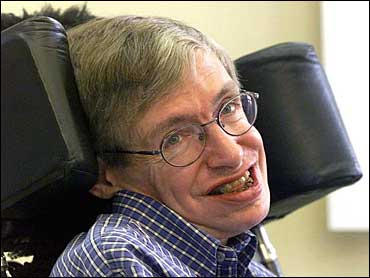 For a few seconds on Thursday, astrophysicist Stephen Hawking expects to feel the exhilaration of escaping his paralysis and floating free in zero gravity.

"For someone like me whose muscles don't work very well, it will be bliss to be weightless," Hawking told The Associated Press in an interview ahead of his planned zero gravity flight.

Hawking, a mathematics professor at the University of Cambridge who has done groundbreaking work on black holes and the origins of the universe, has the paralyzing disease ALS, also known as Lou Gehrig's disease.

The 65-year-old was set Thursday to become the first person with a disability to experience the Zero Gravity Corp. flight.

"As you can imagine I'm very excited," Hawking told reporters before the flight. "I have been wheelchair bound for almost four decades. The chance to float free in zero-g will be wonderful."

Unable to talk or move his hands and legs, Hawking can only make tiny facial expressions using the muscles around his eyes, eyebrows, cheek and mouth. He uses a computer to talk for him in a synthesized voice by choosing words on a computer screen through an infrared sensor on a headpiece that detects motion in his cheek.

He raises an eyebrow to signal "yes," and tenses his mouth to the side to indicate "no."

"I have wanted to fly in space all of my life," Hawking told the AP.

The zero gravity flight in a modified jet that creates the experience of microgravity during 25-second plunges over the Atlantic Ocean should come close for a few seconds.

The jet's interior is padded to protect the weightless fliers and equipped with cameras to record their adventure. Normally, the plane conducts 10 to 15 plunges for its passengers who pay $3,750 for the ride, although that fee has been waived for Hawking.

After the jet has reached its proper altitude, Hawking's assistants will lift him out of his seat and lay him on his back in the front of the cabin for the first plunge.

Other plunges will be made only after the two doctors and three nurses who are accompanying him have made sure he is enjoying it. He won't have his wheelchair and talking computer on the jet with him, although his assistant will bring a laptop and a card with the letters of the alphabet in case Hawking wants to communicate beyond facial expressions.

"We consider ... having him weightless for 25 seconds is a successful mission," said Peter Diamandis, chairman and CEO of Zero Gravity. "If we do more than one, fantastic."

The space tourism company has flown about 2,700 people on the Florida-based flights since late 2004 and began offering them in Las Vegas this week.

Gary A. Leo, president and CEO of the ALS Association, said there should be no medical concerns with someone who has the condition going on a zero-gravity flight, although any person who does should consult a physician.

Hawking is one of the best-known theoretical physicists of his generation and also wrote the book "A Brief History of Time."

He has an ulterior motive for going on the flight other than the personal thrill of weightlessness — Hawking believes in the importance of private space ventures and the need to reduce the cost of space tourism so that it's accessible to more people.

"I am hopeful that if we can engage this mass market, the cost of space flight will drop and we will be able to gain access to the resources of space and also spread humanity beyond just Earth," he said. "Sooner or later, some disaster may wipe out life on Earth. The long-term survival of the human race requires that we spread into space."