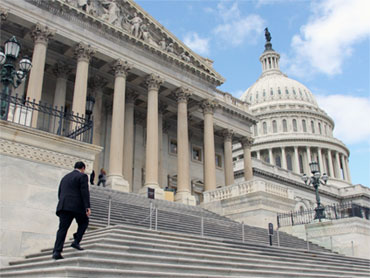 President Obama and Congress are both back from vacation, and this morning everyone will hit the ground running.

It's no exaggeration, reports CBS News senior White House correspondent Bill Plante, to say that President Obama's political future is riding on the appeal he will make for healthcare reform tomorrow. CBS' Bob Schieffer said yesterday that "this may well be the biggest week of the Obama administration so far." If Mr. Obama fails to get a health care reform package, Schieffer said, "he'll be in trouble from here on."

But before reentering the fray on health care, the president addressed schoolchildren on the importance of responsibility - a speech that spawned some conservative critics to charge the Mr. Obama with trying to "indoctrinate" a captive audience of kids to his political agenda.

But it is Mr. Obama's speech on health care reform before a joint session of Congress tomorrow that is really crucial - and the president previewed his arguments to union members at a Labor Day rally in Cincinnati.

"It's time to do what's right for America's working families, to put aside partisanship, to come together as a nation, to pass health insurance reform now," he said.

The nation currently spends $2.5 trillion on health care, but an estimated 46 million Americans have no health insurance.

The president reiterated his support for government-run public insurance program, even though White House officials have made it clear that he's willing to sign a bill without it - a potential concession that has angered many of his supporters.

Some analysts believe Wednesday's speech will be President Obama's last chance to regain control of the debate.

"It's important for the president to remind people what's in this reform for them, and also to be a little bit more specific," said CBS News political analyst John Dickerson.

In a fresh sign of divisions in the president's own party, a key House Democratic moderate said he can no longer support legislation that includes a new public insurance plan to compete with private industry.

And in the Senate, any hope of bipartisan agreement hung in the balance as a small group of negotiators on the pivotal Finance Committee prepared to meet in a last-ditch effort to reach consensus on a compromise bill.

Rep. Mike Ross, D-Ark., took the lead in July in negotiating changes to House Democrats' health overhaul bill to make it more palatable to moderates. He voted for it in committee with a public plan - something most House liberals say they can't do without.

But Ross said Tuesday that after hearing from constituents during the August recess he could not support a bill with a public plan.

"If House leadership presents a final bill that contains a government-run public option, I will oppose it," Ross said.

The six Finance Committee senators - three Democrats and three Republicans - planned to meet to consider a new proposal that might be the last, best hope for an overhaul agreement. The proposal by the committee chairman, Sen. Max Baucus of Montana, leaves out the government-run alternative favored by liberal Democrats.

Four congressional committees so far have produced partisan plans for revamping the nation's health care system. Baucus had said he would move forward with a plan if there's no bipartisan agreement by Sept. 15, but the chairman now faces new pressure to get a deal ahead of Obama's speech.

Baucus would impose a fee on insurance companies to help finance coverage for uninsured Americans.

It's not clear whether that would win support of two key Republicans in the group, Sens. Chuck Grassley of Iowa and Mike Enzi of Wyoming. The Baucus proposal reflected many of their priorities, chief among them the decision not to include the so-called public option to compete with private insurers.

Grassley said Tuesday that the administration had been "all over the ballpark" on the issue before Congress' summer recess and that he's still interested in finding a bipartisan consensus, if possible.

Asked on CNN about the prospect of the talks scheduled to resume later Tuesday, he replied, "We won't know until we meet. ... The good and the bad of the president speaking this week is we've had to speed up the work of our group to have something better ... and that's bad because we probably should have taken a little more time."

Grassley said he was concerned that any fee charged to insurance companies would end up getting passed on to other premium holders, and he embraced the notion of nonprofit health care cooperatives to help provide coverage for the uninsured - an alternative to the public plan.

Saying Americans voice have been heard, Sen. Bob Corker, R-Tenn., said on "The Early Show" today he does not believe a public option will be part of a final health care reform package. "While I think certainly the president will mention that in a speech Wednesday night, I do not think it's going to be a part of a plan that passes unless it's done through reconciliation, which to me is not the route to go."

Sen. Amy Klobuchar, D-Minn., said that there is a consensus among the public: "People want to get more affordable health care. They want to have stability, so if their kid gets sick, they don't lose their health care."

Klobuchar told "Early Show" anchor Harry Smith, "You're starting to see some people talking about coming together here. I think that there are many things we can do. First of all, we need to put strong regulations on insurance companies so they can't punish people just because their family member gets sick. You have to be able to take your insurance with you when you go someplace, if you change jobs or you lose your job." She also said that because small businesses pay 20 percent more than large corporations for health care, a public option would allow them to buy into a pool like the federal employee health care plan.

"People like Amy I know want to work to solve this problem," Corker said, "but my hope is what we'll do is move away from those things that separate us, let's take an incremental step, let's do no harm, let's do something that will stand the test of time, increase competition, create more access, and let's move away from those things that have been the issues that have separated our country and caused so many people around our country to be concerned about their own health situation."

Klobuchar said President Obama's speech is "incredibly important. This is his moment put some meat on the bones with these proposals. I think Americans have learned so much in the last month, so they are ready to hear from him."

Despite all of the heated exchanges of the summer, Klobuchar said, "people are ready to listen and to learn and I think it's very important [Obama] focus on the affordability issue, the cost, how we can make this system work. The Mayo Clinic in Minnesota, if the hospitals in the country use the same protocol they used for chronic diseases, we'd save $50 billion - $50 billion in taxpayer money every five years. That's just one example."

[Klobuchar was referencing a December 2008 white paper by the Dartmouth Institute for Health Policy & Clinical Practice which said adopting the Mayo Clinic's organized practices strategy would save 30 percent of the nation's health care costs for acute and chronic illnesses.]

At stake in the current debate, beyond the future of health care, is an accomplishment that Democrats need, to convince voters they deserve to remain in power.

But lawmakers will also be working on other pressing issues, including energy policy and new rules for the financial industry.

Democrats can point to major accomplishments in the first eight months of this year, including the $787 billion stimulus package; a law to curb smoking, particularly among teens; expanding subsidized child health care; measures to protect women workers; and the "cash for clunkers" program.

Reid is presenting an aggressive agenda upon Congress' return: "Delivering on health insurance reform and clean energy, providing jobs by improving our infrastructure, and reining in the behavior on Wall Street that contributed to the economic downturn."

Financial legislation is also on the table. The House Financial Services Committee is expected to consider a bill this month on Mr. Obama's proposals to protect consumers from financial industry excesses. The Senate is likely to follow later in the year.

The death of Sen. Edward Kennedy, D-Mass., has added a twist. Sen. Christopher Dodd, D-Conn., now chairman of the banking committee, could become chairman of the Health, Education, Labor and Pensions Committee, formerly headed by Kennedy.

That would give Dodd a chance at a high-profile victory as he heads into a tough 2010 re-election campaign. It could also result in leadership of the banking committee - and the financial overhaul effort - going to Sen. Tim Johnson, a moderate Democrat from South Dakota, a center for the credit card industry.

President Obama wants to create a government agency to protect consumers from abuses in such areas as credit cards and mortgages. Johnson voted against credit card protection legislation pushed through by Dodd earlier this year, saying it could limit access to credit and jeopardize thousands of jobs in his home state.

And then there's the issue of clean energy. The House in June narrowly passed a bill based on a "cap-and-trade" system in which companies would get pollution allowances that they could sell if they went below emissions limits, or buy if they could not meet the requirements.

But prospects are uncertain in the Senate, where Republicans and coal-state Democrats oppose it. The leading Senate proponents, Democrats Barbara Boxer of California and John Kerry of Massachusetts, plan to delay introducing their bill until late September. They cited Kennedy's death, Kerry's August hip surgery and the Finance Committee's focus on health care.

Meanwhile, the Senate will spend much of its floor time on annual spending bills that are supposed to be passed before Oct. 1, the start of the new fiscal year. The House has passed all 12 bills that provide the $1.2 trillion to operate federal agencies in the coming year - that's the "discretionary" part of the $3.6 trillion federal budget.

But the Senate has acted on only four, and the House and Senate have yet to reach common ground on any. That means Congress, as has become the custom in recent years, will have to approve a resolution to keep the government running after this budget year ends Sept. 30.

Other chores for Congress include: