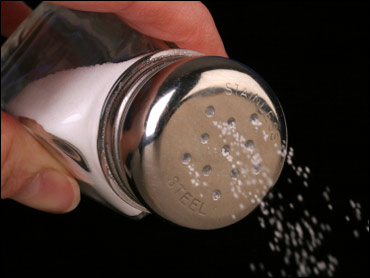 Public health experts urged the Food and Drug Administration Tuesday to force food makers to gradually cut the salt hidden inside their products, something the agency is considering.

Americans eat about 1½ teaspoons of salt daily, more than double what they need for good health - and high enough to increase risk of high blood pressure and other problems. Most of that sodium comes inside common processed foods - from soups to frozen pizza to sliced cheese.

"When you absorb extra salt, you also absorb extra water and that has to go into the same circulation, so the pressure increases. That pressure can damage the brain, the heart and the kidneys," said Dr. Holly Andersen, Director of Education and Outreach for the Ronald O. Perelman Heart Institute at NewYork-Presbyterian Weill Cornell Medical Center.

Tuesday, the prestigious Institute of Medicine said the food industry hasn't done enough to voluntarily cut back. It urged FDA to set maximum sodium levels for different foods in a stepwise rollback, so people have time to adjust to the change.

The FDA hasn't decided whether to regulate sodium levels, but "no options are off the table," said spokeswoman Meghan Scott.

"There is no initiative at the moment," she said. But, "there is very little debate any longer over the impact sodium has."

An FDA source told CBS News the FDA is having discussions about limiting salt, but that no decision has been made about taking action - especially not about specifically regulating the amounts of sodium in food.

The IOM is an independent agency chartered by Congress to advise the federal government, and is just the latest in a string of health groups to pressure the FDA in recent years to cut the salt.

The American Medical Association has said that if the salt in processed and restaurant food were cut in half over 10 years, that ultimately 150,000 lives a year could be saved.

One in three U.S. adults has high blood pressure, in turn a leading cause of heart attacks, strokes and kidney failure. And while being overweight and inactive raises blood pressure, too much salt is a big culprit as well.

Government guidelines set 2,300 milligrams of sodium as the maximum daily intake - the amount above which health problems can appear. But the IOM says people need just 1,500 mg a day, even less if they're over 50. Yet average consumption is more than 3,400 mg.

Major foods makers have started reducing sodium in recent years, but have argued that they don't have tasty ways to replace sodium for deep cuts - and they fear consumer backlash as the taste changes.

But specialists say people do gradually get used to the taste of less sodium.

"The best way to accomplish this is to provide companies the level playing field they need so they are able to work across the board to reduce salt in the food supply," said Dr. Jane E. Henney of the University of Cincinnati, a former FDA commissioner who chaired the IOM report.